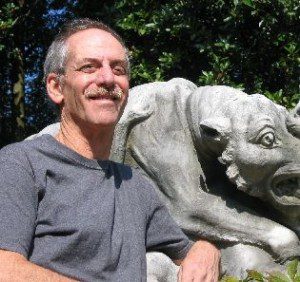 Several years ago, before I had any thoughts of writing a book on the history of symbols, I was a resident writer among others at the Rockefeller Foundation Bellagio Center on Lake Como.  On occasional late evenings after supper, we would be at the Cava Turacciolo, a little wine bar in the village, exchanging thoughts on just about any topic that might drift through the minds of people sampling wine together.

Once, a musicologist, a psychologist, and I talked about symbols and how they were the roots of our most basic and primitive thoughts.  The musicologist said that modern musical notation is attributed to Guido d’Arezzo, a Benedictine monk who lived at the turn of the first millennium, but that more primitive forms go back to the Phoenicians.  I, the mathematician, had ventured a guess about the symbols I work with almost every day:

“Almost all mathematics was rhetorical before the 16th century.”

“What?!” the psychologist snapped.  “What about multiplication?  You mean to tell us that there was no symbol for ‘times’?”

“And equality?  What about ‘equals’?” the musician asked.

“But surely Euclid must have had a symbol for addition,” said the psychologist. “What about the Pythagorean theorem, that thing about adding the squares of the sides of a right triangle?”

A contemplative silence followed as we sniffed and sipped expensive Barolo.

It was a discovery and a shock: well-educated people (even some mathematicians) are amazed to learn that mathematics notation did not become really symbolic before the 16th century.

Another book? I timidly mused, half-aware of being quite tipsy.

The following morning I soberly reflected on the powers of symbols, and soon understood that, at their roots, they provide the means of perceiving, recognizing, and creating meaning out of patterns and configurations drawn from material appearance or communication.

From conversations with a classicist I learned that the word symbol comes from the Greek word for token, or token of identity. Sumballo is a combination of two word-roots, sum (together) and the verb ballo (to throw).  A more relaxed interpretation would be “to put together.”  Its etymology comes from an ancient way of proving one’s identity or one’s relationship to another.  A stick or bone would be broken in two and each person in the relationship would be given one piece.  To verify the relationship, the pieces would have to fit together perfectly.

On a deeper level, the word suggests that, when the familiar is thrown together with the unfamiliar, something new is created.  Or, to put it another way, when an unconscious idea fits a conscious one, a new meaning emerges.  The symbol is exactly that: meaning derived from connections of conscious and unconscious thoughts.

A conversaton with a neurobiologist had been subconciously incubating for almost forty years ever since I learned that a fly could safely crawl onto a frog’s back without any worry of being gobbled up.

“A frog easily catches insects in motion,” the neurobiologist told me.  “But he will not bother a most appetizing fat housefly sitting directly in front of him.”

Place a plate of dead flies in front of the frog and he will sit there like a stone garden ornament.  The poor frog would starve to death rather than attack something that is not moving.  But should an insect pass his unblinking visual field, he will snatch it as quickly as a bullet leaves a .357 Magnum.

The frog sees movement.  He is able to catch flies so well because there are no other obstructive confusions in his visual field.  Humans are better at catching flies when the background is white or a solid color, but the moment the fly moves into a field of busy background, we lose track of its movement.

This led me to thinking that symbols provide a blank background on which we may contemplate unadulterated meaning.  They help us to see and to distinguish, as if through frogs’ eyes, the essentials from the disposable, the elementals from the jumbles.

I recall a conversation I had with a cultural anthropologist many years ago. “Why,” I asked her, “do the themes of dreams recur in so many different cultures around the world?”

Her answer: “Picture language predates verbal language. Dreams are a part of the collective unconscious—Jung’s theory.”  This led me to research that topic further, and so I learned that pictures in the mind once gave humans a powerful protolanguage for survival.  I learned that there was a time when humans thought and communicated with noises no more sophisticated than a hound’s yelp.  The first verbal language was likely grunting or need-indicators vocalized by a single vowel.

The evolution of our capacity to make sense of visual meanings happened long before we had any communicating tool that we would now call language.  So, we should be inclined to expect that images are more at the core of intuitive cognition than words.  We may have silent chats with ourselves, have dialogues with the self, but the images we see are more primal and don’t require words for us to understand what we see.  We may translate our images to exercise the connections with our modern-day habit of verbalizing, but such translations are redundant.

A walk in the woods takes in a great many images—the random stones, the fallen branches, the wet leaves at the edge of the trickling stream, the green, the blue sky peeping through the treetops. These are not verbalized.  Rather they become images stored into the gazing thoughts compartment who-knows-where in the brain.  They mingle and become synthesized with other experiences through comparison and association with similar memories of real events and mental images.

Symbols in mathematics are distinct from symbols that come from experiential senses that are apparent in dreams, myths, rituals, and poetry; however, the moment we read a simple equation, images form in the mind along with inner reflections that suggest multiple metaphorical connections and associations with what had been seen before.  Like a walk in the woods, a synthesis is born from all the past symbolic explorations of the collective mathematics journey, a synthesis that issues in a process of abstraction.

Unlike visual conception, inner verbal reflection is a conscious act essential to overcome its impermanence so it can form meaning and be safely stored in long-term memory.

Our unconscious involuntary thoughts interact with our conscious thoughts to give meaning to our thinking.  How could such meaning come, without indescribable perceptions unconsciously suggested by sense experiences of the real world?

Though symbols and words help to form our thoughts and viewpoints, only symbols can shape the complexities of communicable ideas into cohesive expressions.   Words can do the same and are necessary to explain thoughts and ideas.  But because words transiently deal with one thought at a time, they can quickly fall into cracks of muddle while a blitz of advancing words aims to pin down a thought.  Symbols in mathematics are tightly defined by the explaining words that define them, they awake suggestive thoughts that might not be directly intended by the words themselves.

When it comes to algebra, visual conception is beyond any similarities in the physical world.  That’s okay; it’s not the job of mathematics to be concerned with the physical world, nor with what we call reality.  Symbolic consistency and meaning are essentials of mathematics.  So is certainty.  So is imagination.  So is the creative process.  So is hypothesis. So is belief beyond experience.  So is adventure of knowledge.  And there is no better way to do the job of mathematics than by symbolic envisagement.

I once asked a Russian literature scholar, What happens in our minds as we read Dostoyevsky’s Crime and Punishment and come to the point when Raskolnikov beheads the old woman with a swing of an axe?  What role does the ax play as we read further?  Why did Dostoyevsky decide that the old woman should be killed by an ax and not by a gun, nor bludgeoned to death with a poker?  How would our psyches have responded if another weapon were used?

“It’s a beheading,” he answered.  “A beheading has very different undertones than a bruising to death.  Dostoyevsky chose a beheading to leave his readers with clashing images in the mind: a gruesomely bloody death, and a humane swift death.”

Analogously, in mathematics too, we have expressions that lead to competing perceptions.  In a recent conversation with a mathematician I asked: “What comes
immediately to mind when you see the equation  ?”

“Hmm . . .” he replied. “You put the equation   before me and I immediately see the symbols manipulated to know that x equals plus or minus the square root of ab.  But I would also see a square and a rectangle that are aching to be compared.  I see a little poser wiggling in before the whiteboard of my mind: what is the side of a square that has the same area as the rectangle of length a and width b?”

Every mathematician I know would see the same little poser.  The symbols have packaged teasers for unconscious suggestions of geometric figures playing in the background, while the mind rushes though hundreds of specific cases, instantly searching for connections to all the other times such an equation had been seen.

When I recently mentioned this in a conversation with another Fellow at a Bogliasco Foundation residency in Italy, her response was, “Symbols are the incendiaries for those rushes.”

My forthcoming book, Enlightening Symbols, is primarily about mathematical symbols, yet its essence is a consequence of recalling innumerable distinct conversations ever since that one night at Cava Turacciolo.

This article has been adapted from Enlightening Symbols by Joseph Mazur, to be published by Princeton University Press in 2013.