Dolphins in the Wild: an Aquatic Intelligence 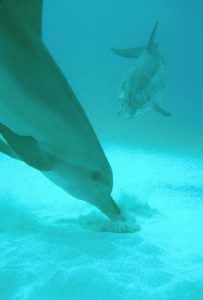 Denise Herzing, Research Director of the Wild Dolphin Project, has completed 27 years of her long-term study of the Atlantic spotted dolphins inhabiting Bahamian waters, and has continued this research as a Guggenheim Fellow in Science Writing.

How do you understand what is going on in the mind of another species?  For decades scientists have asked this question and attempted to explore the abilities of other minds on the planet. Chimpanzees and gorillas are well known for their abilities. African Grey parrots and dolphins have been studied for decades and have displayed that non-primates have similar abilities.

In 1985 I founded the Wild Dolphin Project, a 501(c)(3) non-profit organization based in Florida. My mission was focused: find a place in the world to observe dolphins underwater, try to understand their communication system and society, and then explore the possibility of two-way communication between humans and dolphins. Through a series of events I found myself in the Bahamas in a remote location, home to a community of resident Atlantic spotted dolphins, Stenella frontalis. I immediately knew I had found a unique opportunity and set my sights on a long-term research project working with this community.

One of my greatest personal strengths is perseverance. I knew that I would have to spend a few decades in the wild to fully understand such an alien aquatic culture. My models had been Jane Goodall and Dian Fossey, both women who had planted themselves in the animals’ environment respectfully and for long-term study.

During my first 10 years working on the project, I focused on identifying individual dolphins and tracking them over consecutive years. I recorded their behavior and sounds with an underwater video camera and hydrophone. I watched the development of dolphin behavior as the dolphins I knew grew up before my eyes.

By the mid 1990s, I knew this dolphin community intimately.  Many of the juveniles I had grown up with were now mothers. Some of these females went on to become grandmothers. I knew their personalities, their relationships, and their history. Throughout these years one thing stood out: the dolphins seemed truly interested in us aquatically-challenged human researchers, and would go out of their way to play games with us, show us things, and just plain spend time with us.

I describe the trials and tribulations of long-term fieldwork in my 2011 book Dolphin Diaries, written with the support of the John Simon Guggenheim Memorial Foundation. But through all the challenges of collecting biological data, behavioral data, and environmental data, I still had one goal in mind: to explore the possibility of two species—two different, yet similar species—communicating.  Wild dolphins have interesting and full lives and most would probably rather avoid humans. However there are a few places in the world where dolphins are safe and resources are plentiful, and in these unique situations they can exhibit genuine curiosity about our species.

So in 1997 I set out to design an interface for exploring the possibility of two-way communication with these free-ranging dolphins. After four years of pilot work, and some focused interest from the dolphins, I realized that we were in need of dolphin-friendly technology. In 2010 I reinitiated this project with the help of some high-tech wizards at the Georgia Tech Interactive Computer Department in Atlanta, Georgia.

Every day we are discovering that nonhuman animals, from domestic companion animals to prairie dogs, are much smarter than we have previously known. Many have complex communication systems, show empathic abilities, and have flexible cognitive structures that allow both understanding and functional use of complicated communication. With the current state of technology and data processing, it is now possible to bridge the gap between species.

Make no mistake. Science is a slow, methodologically challenging process. It may take years or decades to advance this area of study. Big claims take big evidence, especially when they demand such large paradigm shifts. But science is nothing without vision. We need both imagination and good science to break free of our own biases and to truly explore nature.  Here’s hoping for the next breakthrough.

Follow this link for more information about Denise Herzing’s new book, Dolphin Diaries: My 25 Years with Spotted Dolphins in the Bahamas