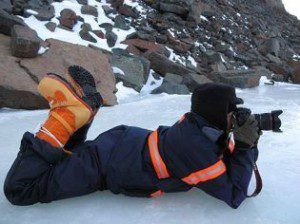 From polar regions to marine laboratories to fire-ravaged forests, Erika Blumenfeld travels the globe to document the connection between humans and our natural environment.

Erika, you are perhaps best known for The Polar Project, which you were inspired to begin during an artist residency at the McDonald Observatory and continued with support from your Guggenheim Fellowship in 2008. Given the extreme conditions in the Arctic and Antarctic, what challenges did you face in terms of methodology and photographic equipment in producing these stunning images of a part of the planet few people have seen?

My expedition to Antarctica during my Fellowship year (2008), and all the photo and video-based works that I produced there, occurred during the initial phase of The Polar Project. The final phase of the project has yet to be realized. Now, nearly eight years after the germination of the project’s original idea, I am still working to surmount the many challenges of making such a large-scale artwork in these remote and extreme regions.

Once you make a decision to work in an extreme environment, you are essentially opening yourself to a wide range of logistical considerations that are not normally encountered in the traditional studio—the 40 pounds of clothing necessary to keep warm, the extra insulation so my camera and light recording equipment wouldn’t freeze up, the requirement to touch copper before touching my computer so as not to produce an electric spark that can result from the extreme aridness, the otherworldly environment that incessantly challenges your visual perception of the horizon and of space in general, and the reality that certain risks are always present.

This is the stuff of personal challenge and creative spontaneity, but also of deep awe and humility. Any challenge I have faced has always carried with it the joy of adventure and of collaboration. A project such as this could not have progressed as far as it has without the many committed experts in various fields supporting the project’s vision with their knowledge and insight. I could not have faced any of these challenges without their support and creative innovation.

Even the logistics of getting to and living in the polar regions must have been complicated.  How difficult were those arrangements?

Indeed, my primary challenge at that time of my Fellowship was gaining access to the Earth’s southernmost continent. Antarctica is the most extreme environment on the planet, and if it were not for the intensive international support focused on the logistics of bringing supplies, fuel, and food down to the various scientific research stations, it would be nearly impossible to survive in the Antarctic environment.

An expedition to Antarctica that plans to spend the majority of its time on the continent itself, as opposed to along the coast, generally requires a partnership with one of the science organizations that have research stations there. This is no small effort. I attempted collaboration with the National Science Foundation, which runs the U.S. research program at McMurdo Station, for three consecutive years, but unfortunately the essential form of my project exceeded the capabilities of their Artist and Writers Program. However, in a rare and wonderful opportunity, I was invited by the South African National Antarctic Program to join the expedition of the Interpolar Transnational Art Science Constellation (ITASC) research team in January 2009.

ITASC consisted of an extraordinary team of artists and scientists, and I was both their artist-in-residence and official team member. Our primary purpose as a team was to experiment with living and working on the ice, one kilometer away from the main SANAE IV Base Station, in a mobile geodesic tentlike dwelling, called ICEPAC (for ITASC Catabatic Experimental Platform for Antarctic Culture), which was run entirely on wind and solar energy.

The expedition was designed to be a field phase in the development of this portable sustainable research station for artists and scientists to do fieldwork in the Antarctic environment. Since The Polar Project would need such a structure to implement its final phase, it was of immense importance to be a part of this research project. The ICEPAC structure masterfully dealt with the challenges of the incredibly powerful winds, but the biggest challenge was dealing with the cold—one stormy night brought temperatures down to nearly -20° Celsius.

It seems interesting to mention that, as far as we know, humans first sighted Antarctica in 1820—I always marvel that we were peering deep into the night sky with telescopes, discovering distant galaxies and stars before we had ever set foot on Earth’s fifth-largest continent. On the ice, we are still visitors in an alien land. In fact, the only life-form native to the continent that I encountered in my four weeks on the ice was a small string of red lichen several inches long, clinging to a rock face amidst a seemingly infinite field of ice.

Working with the Scripps Institution of Oceanography, you’ve also captured the beauty of sea life, specifically bioluminescent dinoflagellates in your Living Light series, and other photographic projects have taken you to the Gulf of Mexico and the coast of El Salvador. Returning to terra firma with Wildfire Series, you documented the scorched landscapes after such fires.  Do you have a favorite among your series, and is there a common thread running through them?

While the directions of my projects may at first appear to be disparate in one sense, there indeed emerges a common thread among them, although I must admit that sometimes this commonality can be illusive even to me while I am first exploring a new direction.

In all my pursuits I am compelled to follow what inspirations arise, and find that this is not a linear path, but one that meanders, circumnavigates, veers, and generally cycles back around. In this way, I learn what my questions are. Seeing the many different angles from which the questions inevitably appear I can then approach them within my work from as many angles in order to find common threads that may lead to conclusions. However, as it seems that I rarely find distinct answers but rather more and more questions, it would perhaps be more accurate to say that what I’m looking for is a certain synthesis and cohesion within the questions themselves.

What has become resoundingly clear throughout all of my work over the last 20 years is that I am ever motivated by what I experience as the deep meaning that exists in connecting with the wondrous phenomena of our natural environment. This sense of valuing nature is a founding ethic that spans our ancestral cultures, and from my perspective as an artist is evidenced even in the earliest recorded human art. It seems clear that cultures throughout time have found deep meaning in their relationship with nature.

Yet when I look out at our current culture, I see us struggling to understand what nature really means to us today. Too often in today’s culture, it seems that if we believe that we have lost touch with our natural environment then we are deemed nostalgic and anti-progress. However, I maintain that only through developing a cultural experience of meaning with our natural environment can we surmount the many environmental crises that we face.

You have described yourself as an “environmental archivist” and “eco-photojournalist.” Encountering your work, a viewer might feel you are competing with time itself—trying to save for generations to come environments that are quickly fading, much as “anthropological archivist” photographers Edward S. Curtis and George Catlin preserved images of fading Native American populations. What kind of response has your work generated, and do you hope to have an impact on environmentalism in general and the climate-change debate in particular?

Descriptors are funny things, and my immediate instinct is to wriggle out of any label that is imposed, and yet in an attempt to describe what I do in more distinct terms, I have nonetheless resorted to them. I have tended to seek descriptors that point in the direction of my focus, rather than something simply self-referential, although maybe there is no difference. The words ecological archivist (considering here the many evolving definitions of the word ecological, i.e., that it is not possible to separate the human system from the natural system) to me points to my interest in documenting for posterity the complex interconnection between our natural environment and our relationship to it, “eco” being a way to connote the particular focus on this interest in my documentary practice.

I must admit to being motived by a desire to preserve the aspects of our natural environment that are most in peril, in the various ways my artistic practice leads me to document them. I envision the natural environment as not only our natural heritage, but as our cultural heritage as well—in my mind the two are inextricably linked, and I’m currently gathering a list of examples that illustrate how.

However, I do not set out to make my work in order to impact environmentalism or the climate crisis, per se. These things are the social contexts within which I make my work, but I am far more interested in bringing an experience of some aspect of the natural environment to a viewer directly, whether that be the incredible beauty of a landscape, a bioluminescent organism, an astronomical phenomena, or the harsh realities of an industrially caused ecological disaster.

It seems that we have somehow lost touch with the reality that our natural environment is in fact the source of our sustenance and survival. I certainly don’t hold any answers about how to solve the issues we face because of environmental negligence or impending anthropogenic climate disruption, but in a small way I feel I fulfill my intent as an artist if I can engage in one-on-one dialogues with the viewer through the work in order to ask what I consider to be one of the most poignant questions of our time: is the natural environment truly meaningful to you?

The response to my work, from that vantage point, has been remarkable and is always humbling. I remember one person saying that since seeing an exhibition of my Light Recordings work he has made an effort to get away from the city lights of his home in San Francisco and into a dark-sky area in order to experience the vast expanse of stars one can see away from light pollution. In my recent exhibition of the Wildfire Series, which documents the increase of drought and wildfires due to climate disruption, I learned that the gallery staff had witnessed many people with tears in their eyes throughout the exhibition period. To me, these and other responses like it describe the intuitive meaningful relationship that we have with the natural environment that lies underneath this complex civilization that we have built up around us. In the end, what we hold as truly meaningful is what we will unite with.

What projects are you currently working on?

I always have a lot of irons in the fire, and many of my previous bodies of work continue to evolve or reappear. The studio work I’m mainly focused on at the moment is the Wildfire Series. This body of work more than the others seems to synthesize for me the more formalist, reductive work that I was doing before the photojournalistic work, with the direct socio-environmental context that emerged as a result of doing the photojournalistic work. This will likely lead me to begin a project I’ve been sketching on paper for about ten years that relates to trees and the color green in our perceptual experience. I’m also about to begin a collaborative project with NASA in the spring, and in addition am working on a research and writing initiative that looks at nature in the context of our cultural heritage ethical frameworks.