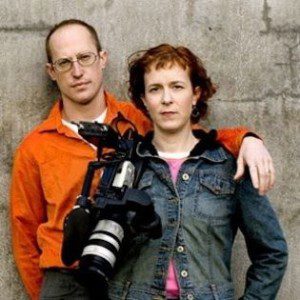 For the past twenty years, Michael Galinsky has been making films with Suki Hawley.  After making two narrative features (Half-Cocked in 1994 and Radiation in 1999), they began work on the documentary Horns and Halos (2002), which they completed in partnership with David Beilinson.  Since then, they formed the collaborative production studio Rumur.  In 2011, they completed and distributed their fifth feature (third with Beilinson), Battle for Brooklyn.

GF: Michael, I think if you had been born before cameras were invented, you would have been compelled to be a writer, and in fact while at NYU you edited F-Stop, and you are currently a contributing editor for International Documentary Magazine. Yet when you have a story you want to tell, you turn to filmmaking. What drew you to this form of expression?

MG: Filmmaking allows one to put every artistic element to work. The words inform the image, inform the sound, etc.  I like to write and photograph to work through ideas—but I do think that film allows me to think about all the different elements and how they work together to create a more profound whole.  Film is also a deeply collaborative form, and working with my partners, David Beilinson and Suki Hawley [his wife], allows me to play to my strengths and draw on theirs at the same time.

GF: How do you choose your subjects?  Although the topics seem far-ranging, do they share a common thread?

MG: I think myself, Suki, and David tend to focus on characters that (like us) are struggling against great odds to fight for something they believe in.  In many ways all of our work is personal even when it’s about someone very different from ourselves.  Suki and I started out making narrative films that “documented” the underground music world.   While on tour (separately) we both met the same group of explosively creative people in Louisville, Kentucky, and knew there was a film there. At the time, I was a photographer and she was in graduate school for film.  She spent the summer shot listing and being the director’s assistant on Party Girl [Daisy von Scherler Mayer, 1995].  She realized that she knew more than she had thought and I talked her into dropping out to make a film with me.

While we wanted to document the music scene, for a couple of reasons we didn’t want to make a “documentary.”  From taking some anthropology courses I kind of got it into my head that one couldn’t make a “documentary” about something that he or she was a part of.  In a sense I had unconsciously internalized this deeply colonialist idea that one could only make a doc about “the other.”  Over the last several years I’ve come to feel exactly the opposite.  I am very troubled by the deeply colonialist nature of many documentaries.  In any case we decided to make a script and try to capture the essence and the feeling of this world we were a part of.  We also didn’t feel that we could make a doc because we couldn’t afford to shoot much film and at that point video wasn’t really an option.  That film, Half-Cocked, focused on a bunch of kids who steal a van full of music gear and pretend to be a band on tour to stay out on the road.  It’s a film about the music world but it’s also about creativity, passion, and, in some ways, filmmaking.  We followed that up with a film that explored both a similar story and similar themes.  While it was a little more grown up, it was also a little less creative.  We hadn’t gotten much support for our first film so we tried to be a little more “professional” for our second.  Still it was a nightmare of a shoot about a nightmare rock tour, and the process of making the film was a little bit too much like the film we were making.  We actually made a little short about this.

Making those films, shot on film with no money, was beyond difficult.  So when DV video cameras dropped to under five grand we jumped into documentary with a lot of passion.  With Suki’s background in classic Hollywood cinema, we thought about documentaries in the same way that we would narrative films.  Horns and Halos follows a wild underground publisher as he tries to republish a discredited bio of G. W. Bush.  We shot for two years and then edited for a third.  It was hard to work waiting for the end to happen but it was also incredibly freeing to be able to make work without having to rely on anyone else.  The main problem was that it was incredibly time consuming.  Looking back over the last few docs we’ve made and the several that we are working, we have come to see that we are attracted to stories about strong people with powerful beliefs who are kind of shunned for those beliefs.  Despite the lack of support, they knuckle down and stay committed to their goals.  Our characters are often somewhat successful in reaching their goals, but it takes them a very, very long time.  So we do have hope . . . and that hope was borne out by getting the Guggenheim [Fellowship], which is pretty much our first real grant after twenty years of work.

GF: You address a number of hot-button issues in your films: media bias in Horns and Halos; the interplay of the police and communities they serve and the media’s impact on both in Code 33; and the struggle between communities and government in Battle for Brooklyn, for a few examples. How hard is it—and is it necessary—for a filmmaker to keep his own opinions or biases out of a documentary film?

MG: Every filmmaker approaches in a different manner the idea of how much of his own opinions to put into a film.  I think that we make films that have a discernible point of view but rarely argue a position.  Horns and Halos raises some very serious questions about media, power, and politics.  However, we took pains not to answer those questions in any kind of neat package.  Increasingly our work has become focused on the middle ground even as our culture runs to the edges.  Battle for Brooklyn follows a character who is fighting a major development in New York [the new Barclays Center Arena].  It’s a deeply corrupted process that is made possible by exploiting political connections as well as political ideals.  Liberals supported the project (without knowing much about it) because it would create jobs and housing (supposedly).  It didn’t. I shot this follow up at the ribbon-cutting [on September 21] where it was clear that all of the promises had been broken but the media dutifully talked only about what they were asked to cover.

Since we were following a community fighting to save itself from being bulldozed, the film naturally aligns with the opposition. However, it is not an activist film.

GF: Conversely, when working on Donor 67 did you find it difficult to reveal so much about your own history, family life, and struggles with the ethics and consequences of sperm and egg donation?

MG: I have always made personal work but haven’t really had an outlet for most of it. As such it wasn’t such a big leap to focus on myself in Donor 67 (now called Conception). That film was intended to be deeply personal but has become much more wide ranging as I have worked on it.  It is funny, though, because our next film is also very personal and naked.

GF: In your current project, is it fair to say your own experiences with alternative medicine are more of a jumping-off point, with the real focus of the film being an exploration of orthodox medicine’s resistance to the heterodox?

MG: This is very fair to say.  We believe strongly in the idea that for a film to work it has to connect emotionally, and the only way to really do that is to have characters.  I have been struggling with back pain and have deep respect for Dr. Sarno and his work.  [John E. Sarno is the controversial author of The Mindbody Prescription and Mind Over Back Pain, and a professor of and specialist in rehabilitation medicine at NYU.] As such, a film that combines my struggle and an exploration of his work makes a lot of sense.  We then use these stories as a way into the much deeper and complex story of the pain industry and the medical industry in general.

GF: You are also a photographer, and have three books—Scraps (1999), Lost (2007), and Malls Across America (2012)—to your credit, and have had your photographs published in Rolling Stone, Jazz Times, and The Independent, among other magazines.  Are there certain subjects best addressed with a still camera?

MG: Clearly office work can best be covered in photographs (reference to Amy’s very wild and awesome work).  As a photographer, as with all of my work, I have travelled through some distinct phases.  Scraps and Lost are all shot in black and white with a somewhat crappy camera that give the images a soft, dated look.  I then got a cheap T4 point-and-shoot with a stunning lens.  For the next ten years I shot almost exclusively with that and got the film developed at the Hallmark shop so I could get double prints to use as kind of contact sheets.  I shot about 500 rolls that way and then ran out of money and got a not-so-hot digital camera.  I didn’t shoot a lot until I was finally convinced to get a real DSLR and since that happened three years ago I have been shooting like crazy. It’s not easy to carry that camera everywhere, but I do bring it around a lot and I am always on the lookout for images.

GF: Can you discuss some of the rewarding or perhaps the challenging aspects of being a member of the community you are documenting? Did you begin your work on Battle for Brooklyn to propel something, capture something, or both?

MG: Documenting a community over a long period of time is a fraught process.  I heard [award-winning documentarian] Joe Berlinger speak the other day and he touched on how difficult it can be because we want to love and support our subjects much of the time, but if we love and protect them too much we are going to make crappy films—kind of like if we don’t let our kids screw up, fall down, get sick, we’re gonna make crappy people. We set out to capture the moment, not to propel it but to propel the future.