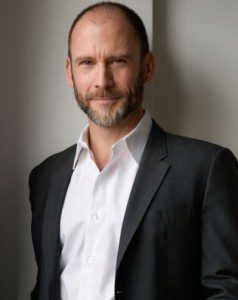 Every day we’re prodded by the media, celebrity endorsers, doctors—and our own guilty consciences—to exercise, but how did this idea become so all-pervasive, and why?  Bill Hayes will be answering these questions in Sweat: The History of Exercise with the same clarity and accessible style that made Sleep Demons and The Anatomist popular with critics and readers alike.

In each of your three critically acclaimed books you’ve managed to brilliantly illuminate the intricacies of the human body in a way that is both accessible and engaging for the lay reader. How did human physiology become the focus of your writings?

Curiosity just took me there.  Sometimes I think I’m still in that stage you see babies in where they are endlessly fascinated with their own limbs.  I’m 52 now, so I don’t see myself growing out of it.  I look at the body as an amazing machine and try to figure out how things work.

I was interested in biology and medicine in high school and dreamed of becoming a doctor but, frankly, I did not excel—I nearly flunked chemistry—whereas writing and the arts came naturally to me.  I followed that path instead.  Through writing, I’ve been able to explore what interests me—anatomy, physiology, medical history, the body.

I’m intrigued by your movement during your career from the highly personal—Sleep Demons: An Insomniac’s Memoir (2001), for instance, was born of your own struggle with insomnia—to the more esoteric.  The Anatomist (2008), which not only “perus[es] the body’s 650 muscles and 206 bones,” as the Washington Post’s reviewer phrased it, but also delves into the life of the author of Gray’s Anatomy, seems a kind of bridge between the two. What drew you to Henry Gray, and to the field of the history of medicine?

I’d had a copy of Gray’s Anatomy for years—I picked one up at a used bookstore at some point.  One day, I used it to fact-check something as I was finishing my second book, Five Quarts: A Personal and Natural History of Blood.  I remember putting it back on my shelf when a thought popped into my head:  Who wrote this thing anyway?  Who was Henry Gray—was there really a Henry Gray?

I took the book back down, found no bio or explanation within.  I began poking around in reference books.  I didn’t find much, and that was the key.  I needed to keep digging.  I had no idea at the time that this would lead to a book, which would end up including a year spent studying anatomy alongside first-year med students.  I went from never having seen a cadaver to doing full cadaver dissection, trying to get a feel for what Gray had done.

Sweat: A History of Exercise, which you will be working on during your Fellowship term, will trace the evolution of the idea and practice of exercise, as distinct from sport, play, or athletics, from ancient Greece to the present day, with a particular focus on the sixteenth-century Italian physician Girolamo Mercuriale, whose De arte gymnastica (1569) revived the neglected “art of exercising.”  How did you come upon this little-known work, and perhaps even lesser-known man?

This too started with a simple, almost stupid question:  I’d finished The Anatomist, had time on my hands, and spent hours working out at a gym. I was atop a StairMaster, sweating away, and the slight absurdity of the whole scene struck me:  How did we all get here—end up in gyms?  What sequence of historical events led to my standing up here on this StairMaster right now?  I wondered if a history of exercise existed.  I didn’t find one, so I started looking into it.  One of the first places I went was the special-collections room at the New York Academy of Medicine, where I met the amazing and hugely knowledgeable librarian/curator Arlene Shaner.

Before my first visit, I had requested ten books on exercise or related topics to review—Hippocrates, Galen, the usual suspects in the history of medicine.  She had them waiting for me when I arrived, but I noticed there were eleven books on the cart, not ten.  I pulled out the unfamiliar title—an oversized book in a sturdy slipcase.  “I think you’ll want to take a look at that,” Arlene whispered from her desk.  Inside the front cover, I found a small typed note that traced the book’s provenance.  What I had in my hands was a rare first edition of De arte Gymnastica—The Art of Gymnastics—by Girolamo Mercuriale, a name unknown to me.  That’s how I was introduced.  Arlene Shaner essentially set us up on a blind date.

During your career, you have been an invited lecturer in the history of medicine at universities and medical schools around the country and are currently the Director of Foundations and Major Gifts for the International AIDS Vaccine Initiative.  When you graduated with a B.A. in English from Santa Clara University, could you have envisioned the course your life has taken?

Never.  I wanted to be the next Sylvia Plath but somehow sensed that wasn’t going to work out too well.  My first job was for a membership RV campground company for retirees.  I wrote press releases and flyers about social activities for seniors. I moved to San Francisco—worked in PR for a small nonprofit theater, then SFMOMA, and eventually ended up doing fundraising for the AIDS Foundation.  I had wonderful bosses.  I maintain that perfecting the form of a press release or a grant application—concise, to the point—was better training for learning to write essays than getting an MFA at the Iowa Writer’s Workshop (something else I dreamed of but never got to).  At least, for me.  One of my first published pieces was a 900-word essay that got picked out of a slush pile and ran as a “Lives” column in the New York Times Magazine.  It was basically a literary press release about me.

Although you are still in the midst of researching and writing Sweat, do you have an idea of what subject you might tackle next?

Yes, I’m already working on it:  a collection of short essays on life in New York—my life, street life, characters I’ve met since moving here four years ago—some of which have run in the Times.  I’m calling it “Insomniac City.” 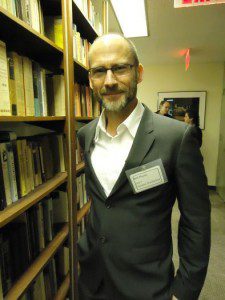 From the reception honoring the 2013 Guggenheim Fellows. Wednesday, May 8, 2013.