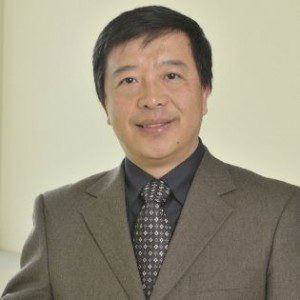 Dr. Yuan is a physician-scientist who has been dedicated to unraveling the enigmatic pathogenic mechanisms and identifying novel therapeutic approaches to pulmonary arterial hypertension, a fatal disease that predominantly affects women. He is also an educator, having trained 102 students and fellows, over two thirds of whom are women or underrepresented minority trainees. During his Guggenheim Fellowship term, Dr. Yuan undertook a study of the role of ion channels in human embryonic stem-cell proliferation and differentiation, with a goal of furthering understanding of the pathogenic and therapeutic roles of stem cells in pulmonary vascular disease.

On a beautiful summer day in Southern California, a blonde-haired girl, five years old, played with her brother and sister in the backyard of their home. Quietly, almost imperceptibly, the girl fainted, lying still in the grass. When her brother and sister saw this, they ran screaming into the house for their parents, who immediately rushed their daughter to the hospital, siblings in tow. Deplorably, not all would return home. Sarah died in the Emergency Room. After an autopsy, doctors worked together with pathologists to diagnose Sarah with primary pulmonary hypertension (PPH), also known as idiopathic pulmonary arterial hypertension (IPAH). 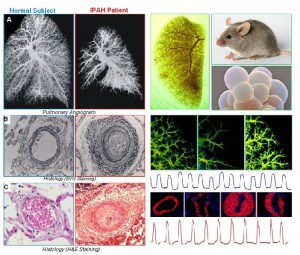 Idiopathic pulmonary arterial hypertension (IPAH), previously referred to as primary pulmonary hypertension (PPH), is a rare and fatal disease that predominantly affects women. In 2000, average survival rate for patients with severe IPAH after diagnosis was 2.3 years (a survival rate even lower than is found with certain types of cancer), and over 25% of these patients would not survive even five years after initial diagnosis. Since that time, dramatic progress has been made by clinicians and scientists: currently, survival data show that 64% of IPAH patients can survive for five years and 56% for seven years after initial diagnosis. Each year, however, many IPAH patients continue to die; while current therapies may prolong patients’ survival, there is no cure for this devastating disease.

Aside from the initial pathogenic cause of IPAH, narrowed (and/or occluded) lumen of lung blood vessels is the major cause of elevated pulmonary arterial pressure in patients (see Figure 1B and C). Increased stiffness of blood vessels and tissues surrounding the vessels, as well as blood clot in the lung, can also increase pulmonary arterial pressure, causing pulmonary arterial hypertension. Based on multiple, extensive studies conducted by many scientists (also known as investigators) across the world, it can be concluded that the genetic, cellular, and molecular mechanisms involved in the development of IPAH are complicated and vary dramatically among patients. Multiple genes and cellular proteins, as well as many functions of the blood vessel cells (including endothelial cells, smooth muscle cells and fibroblasts), become abnormal in patients with IPAH.

Stem cells, which can be found in almost all multicellular organisms, including humans and mammals, are undifferentiated cells that are able to develop into different types of “functional” cells (e.g., smooth muscle cells, fibroblasts, endothelial cells and blood cells) as well as cardiac myocytes and neurons. Stem cells can be either “pathogenic” (a cause of disease, e.g., cancer stem cells) or “therapeutic” (a treatment for disease). Is the “misguided” or abnormal stem cell involved in the development of the pulmonary arterial abnormality in patients with IPAH? If so, which types of adult stem cells or progenitor cells are pathogenically involved in the initiation and progression of the disease (and how are they involved)? Moreover, can abnormal stem cells convert the thin normal pulmonary vascular wall to the thickened or “remodeled” vascular wall (and how do they do it [Figure 1])? The thickened blood vessel wall in the lung subsequently narrows the lumen and leads to increased pulmonary arterial pressure, indirectly shifting the burden onto the right ventricle of the heart. Can we identify the specific pathogenic stem cells in the diseased (or abnormal) lung vascular tissues (e.g., those isolated from patients with IPAH during lung transplantation) and develop more effective therapy for IPAH patients by selectively destroying these pathogenic stem cells? These are the questions that we, along with many investigators in the field, conduct experiments to try to answer. The Guggenheim Fellowship allows me the opportunity to work with my associates and several renowned experts in the field of stem cell research to try to identify the specific pathogenic stem cells from patients with IPAH and chronic thromboembolic pulmonary hypertension (CTEPH), a different form of pulmonary hypertension that occurs more often in the general population.

Since stem-cell therapy was developed to treat many diseases, including cardiovascular disease, can stem cells isolated and prepared from normal subjects be used to treat pulmonary vascular abnormality in patients with IPAH by injection into the lungs? Can genetically engineered stem cells be used to treat pulmonary vascular abnormality and right ventricular dysfunction by intravenously injecting the cells into the patients? Is there any risk that the stem-cell therapy may cause cancer or tumor? The Guggenheim Fellowship provides a unique opportunity to learn how to use abnormal cells isolated from patients and animal models with experimental pulmonary hypertension to find answers to these questions.

With support from the public and the Foundation, I am sure that our dream to find a cure for this disease, and in turn the patients’ dream of living a healthy life, will be realized.