What do you get when you combine a computer scientist, a multitalented artist, and a shared love of puzzles and problem solving?  Erik and Martin Demaine’s beautifully rendered origami sculpture—and promising advances in mathematics and engineering that create a whole range of practical applications.

Although the Demaines’ amazingly intricate origami sculptures are in the permanent collections of both the Museum of Modern Art in New York and the Smithsonian American Art Museum, their art has a serious side. As Erik explains, learning how to apply these folding techniques to sturdier materials, such as metal, glass, and wood, “will lead to a wealth of new sculpture, new mathematics, new computer algorithms, and new applications of folding to science and engineering.” 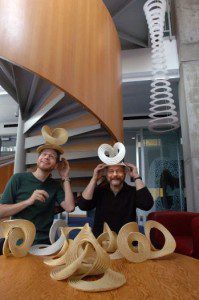 A Career Narrative, by Erik Demaine

My life has always been heavily influenced by my father, Martin Demaine. One of my earliest memories is when I was six years old, and together we ran a business called the Erik and Dad Puzzle Company. We designed wire “take-apart” puzzles, he handmade them, and we sold them to toy stores across Canada. My dad’s parenting style, of treating children and parents as equals, shines through every aspect of this company: we made pitches to toy stores together, and split all profits fifty-fifty. This experience was probably also the beginning of my interest in mathematics.

Afterwards, we went on a travel adventure around the eastern United States, living in ten different places in the span of four years (my ages 7 to 11). Throughout this trip, we decided together when to move on to our next location, and where to go. We also started homeschool, initially out of necessity from frequent travel, but afterward because it was such an effective way for me to learn. This shared experience led to a deep bond and understanding between us that continues to this day.

My interest in computer science originates from my excessive playing of video games. When I was seven, I asked my father, “how do people make video games?” He knew just a little about computer programming, but it was enough to get started and start learning more together. Over the next few years, I learned all I could about programming, mostly from books and a bit from neighbors.

But it wasn’t enough. My dad suggested that we try sitting in the computer-science classes at the local university, first Loyola in Chicago and then Dalhousie in Halifax. These classes were really exciting: they showed me a depth to computing that I didn’t realize existed, and I soaked in all the knowledge I could. One professor suggested that I try taking the final exam, and when I did well, suggested that I enroll as a student. There were administrative hurdles, as Dalhousie University required students to be at least 16 years old. My dad fought for my right to be treated like any other student, and eventually succeeded.

And so it came to be that, at age 12, I officially entered Dalhousie University. Eager to soak up more information and ideas, I took as many computer-science and mathematics classes as could fit in my schedule, and ended up completing a four-year bachelor’s degree in two years.  All the while, my dad sat in classes with me, so that we’d  still be able to communicate. Still wanting more, I went to graduate school at the University of Waterloo, at age 14.

At Waterloo, I discovered theoretical computer science, specifically algorithms, which seemed like the perfect marriage between computer science and mathematics. I knew that this was the field for me. As I started working in the field, my dad noticed how similar mathematical research is to fine art: both center around creativity and careful craft within a medium.

And so we started doing research together, and shortly thereafter started designing and building sculpture together. I taught my dad about theoretical computer science, and he taught me about fine art and craft. The more we worked together on both science and sculpture, the more we saw their relationship and how they could be combined into a single pursuit. We started the theme, which we continue to this day, of exploring problems from both a mathematical and artistic perspective. This liberated us from the traditional constraint of any discipline—to produce work within that discipline—making us more productive. Furthermore, we found that when we got stuck, it inspired us to do work in the other discipline: if we couldn’t prove a mathematical theorem, we could build a sculpture to illustrate this challenge, and if we didn’t know how to build a sculpture, we could use algorithms to help design it. And we found that the spirit of collaboration, quite common in science, could be adapted to our artwork as well.

At age 20, I completed my Ph.D. and joined the faculty of the Massachusetts Institute of Technology as an Assistant  Professor in computer science.  At age 22, I received a MacArthur Fellowship as a “computational geometer tackling and solving difficult problems related to folding and bending—moving readily between the theoretical and the playful, with a keen eye to revealing the former in the latter.” At age 23, I received an NSF CAREER award (2004–2009) and a DOE Early Career Principal Investigator Award (2004–2007). At age 24, I became an Associate Professor and the Esther and Harold E. Edgerton Professor. At age 25, I received an Alfred P. Sloan Research Fellowship (2006–2008). At age 26, I received an Honorary Doctor of Laws degree from Dalhousie University, and received tenure from MIT. At age 30, two years ago, I became a Professor (summer 2011).

Throughout this period, my career as an artist also blossomed. My dad and I seemed to strike a chord with our abstract geometric sculpture of paper folded along curved creases. First our work was displayed and acquired by the Museum of Modern Art (MoMA) in New York. Several exhibitions later, last year we had a “solo” show in Chelsea, New York, featuring dozens of our pieces (2012). Also this year, three of our pieces are part of the 40 Under 40 exhibit at the Renwick Gallery of the Smithsonian American Art Museum, which also acquired the pieces.

I am excited to see where my tightly knit collaboration with my father, and our fusion of science and sculpture, will bring us next.

A Career Narrative, by Martin Demaine

I grew up in the Boston metropolis, and decided I should learn about country life. So I bought 65 acres in northern New Brunswick, Canada, and cut down trees to build a log cabin. This set a pattern for my life of experiencing ideas and learning from the process. After building the log cabin, I hitchhiked around North America, Africa, and Europe.

While in England, I discovered blown glass. I went to Leicester Polytechnic (now De Montfort University), initially as a student, but after a couple of weeks I became an instructor in glassblowing. My work was exhibited in Covent Garden and a piece was purchased by the South Australian Museum for its permanent collection.

After a year in England, I returned to Canada and started the first successful glassblowing studio. Five years later, I built a craft village in partnership with two potters. We did everything required to build the village.  We even bought a woodlot so we could cut down the trees to take to a sawmill to use as lumber for the construction.

Later I got interested in goldsmithing to create jewelry and body adornment from precious metals. I opened a successful jewelry store in Halifax specializing in custom jewelry.  This expanded my understanding of material and design.  I continued through my life to teach myself and explore, continually creating art.

I became a single father when my son, Erik Demaine, was two years old. This changed my life. To understand children, I quit working as a goldsmith and became a fulltime daycare worker. This experience led me to introduce a  sense of discovery and play into my work. A few years later—my son and I decided that homeschool would be a good choice for his education. Learning became fun for both of us. Whatever Erik expressed an interest in, we would go to the library and learn about together.

I am self-taught. I enjoy learning “the hard way”—learning by doing, instead of by instruction. I wanted to be a role model for Erik and show that you can do anything you want to do. Our first collaboration was the Erik and Dad Puzzle Company when Erik was six years old. We made all business decisions together and split the money evenly.

As Erik became attracted to mathematics and computer science, we learned to communicate art and mathematics to each other.  We felt it was important to experience each other’s worlds, so we exchanged ideas. The more Erik and I worked on art and science together, the more we found that this process merged the two. Theoretical computer science follows the same creative process as designing and building sculpture. The final goal is to make art and science indistinguishable.

This theme has continued at MIT where we have both been employed since 2001.  Erik is a professor in computer  science and I am the Angelika and Barton Weller Artist-in-Residence, the first permanent artist-in-residence at MIT. I am also a researcher in the Theory of Computation group and have published 90 papers in peer-reviewed journals and conferences. I am also an instructor in materials science and engineering, where I teach glassblowing.

With Erik as collaborator, we are concentrating on understanding new ways to build sculpture using curved folds.  This artwork simultaneously gives us insight and understanding into the mathematics of folding. Our work has grown and by now has been exhibited at the Museum of Modern Art (MoMA), Renwick Gallery of the Smithsonian American Art Museum, and a gallery in Chelsea, New York.

To me, it is important to always be learning and growing, to be building and experimenting, to show people new directions and ideas, and to share the excitement of discovery. I immerse myself intensely into all of my professions and projects—as puzzle maker and designer, log–cabin builder, architect, goldsmith, glassblower, jewelry appraiser, childcare worker, day trader, mathematician, computer scientist, and paper sculptor.