On Becoming an Artist, Isamu Noguchi, Fellow in Fine Arts, 1927 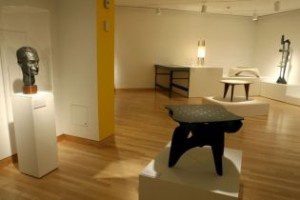 Renowned sculptor Isamu Noguchi (1904-1988) is celebrated for works that transcend the traditional boundaries between artistic mediums, and whose forms continually evoke the beauty of nature.  The impact of his 1927 Guggenheim Fellowship is underlined in an important exhibition at the Noguchi Museum in Long Island City, New York.  Titled “On Becoming an Artist: Isamu Noguchi and his Contemporaries, 1922-1960,” the exhibition focuses on Noguchi’s myriad friendships and creative collaborations with such cultural icons as visual artists Alexander Calder, Arshile Gorky, and Frida Kahlo, designer George Nelson, Renaissance man Buckminster Fuller, and choreographers and fellow Fellows Martha Graham and Merce Cunningham.

The show highlights Isamu Noguchi’s 1927-1928 Fellowship year abroad as a pivotal time in the young artist’s career.  Noguchi received his Fellowship to study sculptural techniques working in stone and wood, using nature as the inspiration for his forms.  Soon after arriving in Paris, Noguchi met acclaimed modernist sculptor Constantin Brancusi, who agreed to allow Noguchi to work alongside him in his studio.  Brancusi, best known for the ability to evoke the pure essence of a subject in his abstract work, exerted a profound influence on Noguchi’s developing aesthetic.  In the exhibition, sculptures by Noguchi such as Leda are juxtaposed with Brancusi’s singular marble forms, displaying the younger artist’s newfound use of an abstract visual vocabulary.

Upon returning to the United States after his Guggenheim Fellowship, Noguchi enjoyed several decades of successful collaborations and commissions, among them gardens and public sculptures in Paris, New York, and Jerusalem.  Works in the exhibition such as Hitler Invades Poland, a 1939 collaboration with Arshile Gorky and De Hirsh Margulies, and Noguchi’s compelling Death (Lynched Figure) illustrate the uneasy history of economic depression and war that served as a backdrop to much of early twentieth-century art.  Later pieces include the artist’s designs for tables, parks, and architectural sites.  The exhibition’s smooth transitions between artistic mediums and materials underscore Noguchi’s versatility, while marking turning points in twentieth-century history and Noguchi’s own creative development.