On the Shoot for Asser Levy Pool Revisited, Greg Miller, Fellow in Photography, 2008 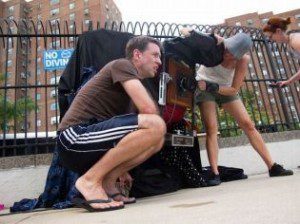 When Greg Miller set out this past July for a photo shoot at the Asser Levy Pool in New York City, he invited some Guggenheim Foundation staff members to come along.  The result of that day’s work, using an exceptional camera and a full crew of assistants, is Miller’s Asser Levy Pool Revisited.

The original Asser Levy Pool series, featuring black-and-white portraits taken at the pool in 1995, is particularly significant for Miller because it marked the first time he used an 8×10 view camera to create the studied works he is best known for.  For his second Asser Levy Pool series, Miller came equipped with a colossal 20×24 Polaroid camera, which creates 20×24-inch instant Polaroids and is one of just five cameras of its kind in existence.  Miller was able to take the photographs with the help of 20×24 Studio, which manages the equipment and analog technology for the rare camera.  One exhilarating outcome of his using the 20×24 Polaroid is the ability of his subjects to see the saturated, large-scale images of themselves just minutes after they are taken.

Striving to depict the nuance of interpersonal exchange in his work, Miller is deliberate in his methodology.   He takes time to interact with his subjects and to carefully construct, or build, his pictures, a rarity in a world where photographers are often more interested in capturing split-second action.  His lush, striking images depicting the activity of a hot summer afternoon at the pool are good illustrations of this emphasis.  The 20×24-inch Polaroids were most recently displayed at +Kris Graves Projects in Brooklyn in September 2010.