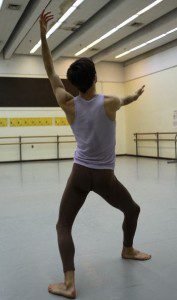 “As far as I can tell, the function of art is to remind us that we have an imagination. This is the gift, the provocation, the mission and the invitation of an artist to others. Without imagination, empathy is not possible, nor the envisioning of solutions or dreams for a better life. Thus art is essential.”

To Lie in the Sky will be my 104th dance but the eighth one using a new methodology I began developing about six years ago.  This new process addressed my dissatisfaction with a way of working that had evolved from the time, space, and economic restrictions of working as a New York City artist.   It has changed the way I make movement, transmit it to dancers, and, ultimately, the way I evolve meaning from movement and find structure.

One of the most important aspects of my new approach is that I allow the dancers to be author to the meanings that emerge from the pure movement itself. It is from this confluence of my movement and each dancer’s embodiment and perceptions that I then shape the work. This frees me to create more on the spot with the dancers and also brings the dancer into the material immediately in a personal way rather than as only a well-tooled machine. In fact, I give leeway to the dancers to not execute the material exactly the same way every time, so that neither I, nor they, give preference to one version over another. This way performance is not about arriving over and over again at the same place but making each performance distinctive and alive for the audience. It acknowledges what happens in performance anyway, but without judgment, and reinforces art as experience rather than product. It embraces, rather than tries to defy, the impermanence of this form, thus making live‐ness pertinent.

I am now in rehearsal with my eight dancers in the studio, in the body-to-body transmission of information and understanding, of evidence and data, from me to them, and them to me. It is a trial-and-error process but I know I have done my homework. I rely on instinct and objective analysis, as I search for the movements and temporal and architectural designs that encapsulate and reveal theories and propositions and invite new ones. It is the most intense part of my research. My goal is not to come to a conclusion but to create a clear but challenging form that can provoke questions for us artists and the audience, not unlike what a good philosophical argument does in its field. In the end dance is only meaningful if it brings the audience to their own bodies, or perceptions of their bodies, in some way.

If To Lie in the Sky does so, my research will have been worthwhile. The relationship between place, body, and self is a topic of long-standing interest to philosophers, neuroscientists, and psychologists, but for us dancers, it is a daily investigation and preoccupation.

Q: The title of your piece, To Lie in the Sky, comes from the poem “Question” by 1959 Fellow in Poetry May Swenson.   Can you talk a little about what the poem means to you?

A: I read the poem in a freshman composition and literature course at Northwestern University with Professor Hoffman. He was tough and brilliant and he assigned us some poems by May Swenson to analyze in writing. I was most drawn, at that time, to her “The Key to Everything” but kept the collection of Swenson’s poems (still have it) and also read “Question.” As I have gotten older this poem has resonated more for me. The passing of friends and family make its musing on the connection between body and selfhood more poignant and pertinent.

Q: What first drew you to choreography and dance?  When did you decide that you wanted to be a choreographer?

A: My parents were a ballroom dancing team when I was born, and they taught and performed throughout my preschool years.  As a result, whenever there was music in our house, we danced! In fact, I do not remember a time when I did not dance. After I was three we had a dance studio in our house and, everyday, I would go in there and make up dances. I didn’t know it was something called “choreographing.”  I was drawn to tap dance and studied tap and ballet at the local studio, and participated in many dance recitals and public park talent contests, but it wasn’t until I was in college at Northwestern that I got any serious training. There I was introduced to modern dance and the art of choreography. I majored in psychology, with an undeclared minor in philosophy, but danced all four years. All members of the modern dance club Orchesis were required to choreograph.  My first dance, Green Hibiscus, was just horrible and really I had very little authorship of it. I copied the structure of a dance of one of my teachers, used music suggested by my boyfriend, and even my title came from my best friend. I really didn’t think I was very creative but something happened to me after I made that first dance for twelve. A door was opened, and my mind was flooded with dance ideas and I couldn’t resist them. A passion was awakened and it has never abated 103 dances later.

At Northwestern I was selected to receive a special cooperative scholarship by our Orchesis group to go to the American Dance Festival to study in the summer of 1966 and it was there that I had my first formal composition class. It was fate that put me in Bessie Schonberg’s class and, much to my surprise, she put one of my studies in the workshop at the end of every week. At the end of the summer she took me aside and told me that she wanted to hear about me, that I must continue to choreograph. I was astonished, but I took it on as my life mission. I attended ADF again in 1968 and 1969 and had Martha Myers for composition, another great teacher, who also encouraged me. But, really, it wasn’t until I moved to NYC in fall 1968 and auditioned a solo for the Clark Center’s New Choreographers Concert that I understood. I remember reading the letter saying I had gotten into the concert and saying to myself, “I guess I’m a choreographer. I am a choreographer!!!!”

Q:  Is there a particular narrative you want to convey with To Lie in the Sky?

A: I believe art is a personal experience and I have only limited control over what anyone “gets.” I can only hope it is meaningful and, as I said in that piece, that the audience is brought to their own bodies in some way in general, and, in particular, to the issue of the relationship between body and self and place. I hope they aren’t bored and feel the movement.

Q: How do you typically decide on a sequence of movements for a dance?

A: There is no system to how I decide on a sequence of movement. Some take a long time to figure out, others just come out instinctively and quickly.  Recently there was one long phrase that I worked for ten weeks by myself to get just right. It went through many versions. And how do I know when it is right? That is the million-dollar question. I just do.  Structure is the most interesting aspect for me of making dances. Each dance has its own rules and you just have to “listen” for them really well. All the answers are in there. I feel making dances is like that old idea of a sculptor, that the image is already in the marble and the sculptor just reveals it.

Q: How do you choose the scores for your pieces?  What do you hope to convey with the score for To Lie in the Sky?

A: I have made many dances that are music-driven, for I love music, and I made a goal for myself a decade ago or so to investigate working intelligently and creatively with music. But I have also used all kinds of other accompaniment. I do not want this to be a music-driven piece. I want the sound to be part of the collage. The audience may be asked to read aloud some things as part of the accompaniment as I did in my last piece.  Some may be in silence. I don’t know yet.  I am in the process of working on this with Quentin Chiappetta, a composer with whom I have worked many times before, to discuss his sound design for the piece. It definitely will not be supplying a pulse or mood signifier for the work. Again each piece is different and ergo so is the accompaniment. I have made dances to Brahms, Philip Glass, Taj Mahal, Michael Galasso, Dave Brubeck, Beethoven, Bach, Devo, Loretta Lynn, the sound of fire in a hearth, of a subway, words from and by the dancers, many other texts, resulting in many different original collages of dance and scores by the different composers with whom I have worked.