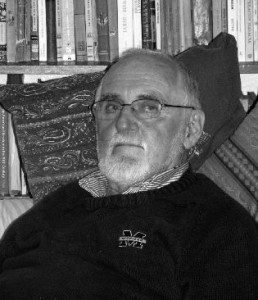 I first came across a short story by Borges in a class dealing with Hispanic literature back in 1954, when I was a graduate student at the University of Michigan. I had long been a fan of detective fiction and had even begun writing short mysteries myself, so I was duly surprised when the title story in one of the books on our reading list was Borges’s stunning version of a traditional detective versus criminal narrative. The title was “La muerte y la brújula” (Death and the Compass). I was as much impressed with its literary style as I was with the fact that it was a formal detective story in reverse: the criminal pursues the detective, a fact that the reader does not realize until the story’s end.

I spoke with the professor who was giving the class—Argentine author and critic Enrique Anderson Imbert—and asked if he thought it might be possible to obtain permission to attempt a translation of the story into English.  He had known Borges for many years and, convinced of his importance, had been trying to make his work known in this country. He encouraged me to go ahead.

By then I had begun a correspondence with a young Argentine author and translator, Rodolfo Jorge Walsh, who had just published an anthology in Buenos Aires titled “Diez cuentos policiales argentinos” (Ten Argentine Detective Stories). I had written to him asking for information on the cultivation of that genre in his country because, under the guidance of Anderson Imbert, I had decided to write my doctoral dissertation on the subject of the Argentine detective story. He was willing to pass on my request to Borges and a short time later I had his reply with a handwritten authorization from the author, who said I was free to translate that story, as well as anything else of his that I might find worthwhile, into his preferred language, English.

This was the initial step in a process that eventually led to the publication of the first collection of Borges’s essays and fiction in English translation. I found several other translations of his short stories in print and then invited my former graduate-school classmate at Michigan, James E. Irby, to join me in assembling the book. Irby was then writing his dissertation, also under the direction of Anderson Imbert, on the structure of Borges’s stories and he had been doing his own translations of some his pieces, principally, he told me, to get an intimate sense of his style. When, at my request, he sent me some examples I saw that they were very good and at that point I invited him to join in editing the book.

By then I had a contract with James Laughlin in New York for the Borges collection. The collaboration with Irby resulted in the publication of Labyrinths: Selected Writings of Jorge Luis Borges, which carried a preface by André Maurois, of the Académie Française, who was familiar with his work. Before the book’s publication, Irby had arranged to meet with Borges in late 1961 in Austin, Texas, where Borges had been invited to teach the fall semester at the university, and he was able to publish the first extensive interview with him to appear in this part of the world.

My own opportunity to meet Borges came several months later when I went to Buenos Aires for a year with a Fulbright research grant to study Argentine literature of fantasy. On the first day there I went to the Argentine National Library, where Borges, now blind, served as Director, and introduced myself. Labyrinths had then been in print for a while and Borges recognized me. He praised our book and went so far as to say that we had actually improved on the original Spanish—a compliment that I later discovered that he paid to all of his translators.

We soon became friends and I had the pleasure of finding myself in his company on many occasions during that year. He was quite capable of moving about the crowded streets of downtown Buenos Aires with just a cane, but he preferred to be accompanied by a friend, whose arm he could take and thus give his full attention over to what was for him the consuming joy of conversation. With Borges, conversation was typically constant and far-ranging.

This turned out to be a comfortable friendship that was highlighted by his four trips to the campus of Michigan State University, where I taught in the Department of Romance Languages for more than twenty-five years. On the last of these visits, he came as visiting professor for the 1976 winter term, and taught two graduate-level courses and offered a series of five public lectures on topics of special interest to him: Swedenborg, Shakespeare, Beowulf, Walt Whitman, and Blindness. He was accompanied on this four-month visit by one of his former students of Old English in Buenos Aires, María Kodama, whom he would marry a decade later in Geneva, Switzerland, some months before his death on June 14, 1986, in that city.

I have gathered a lot of material related to Borges and his career as a writer and I plan to bring it together in the form of a memoir/biography that I think I shall call Magical Journey: Borges’s Life in Letters. He has been an important presence to me, and has contributed significantly to my way of thinking about life, as has been the case with so many of his readers who find it hard not to surrender to the almost gravitational pull of his endless questioning of the many imponderables we face in our human existence: time, space, identity, dreams, destiny.

In his pages we experience the melancholy malaise resulting from an impossible search for order. I understand that his fondness for detective fiction, inherited no doubt from his English grandmother, Fanny Haslam, is explained by the essential character of traditional crime fiction: from the outset there is a problem, then there is an investigation and, finally, a solution. Here is the quintessential instance of order being sought and achieved. Borges’s much-admired friend, the Mexican humanist Alfonso Reyes, went so far as to claim that detective fiction was the surviving classic genre of our time. As I have stated, it was through this path that I found my way into Borges’s singular maze.

But this, clearly, is only one of countless paths that draw his readers close to his center. The constant outpouring of critical writings treating his work—surely in the thousands by now—attests to the singular quality of his prose, one that inspires philosophical thought and commentary.

It pleases me to think that our Labyrinths has helped to convince English-language readers of the importance of this writer, for many years scarcely known in his own country, who now gives his name to an adjective created to characterize a certain type of prose fiction. We have long had “Kafkaesque”; we now have “Borgesian.”

As I write these words, I note that today, May 23, 2012, is the fiftieth anniversary of the publication of Labyrinths by New Directions. Half a century is a long life for a book, and its readership, moreover, has not declined over those years. But Borges, of course, is for the ages.

Follow these links to view articles by Donald Yates that recently appeared in Variaciones Borges, which is published at the University of Pittsburgh: