What’s the Buzz? A Conversation with Michael Engel 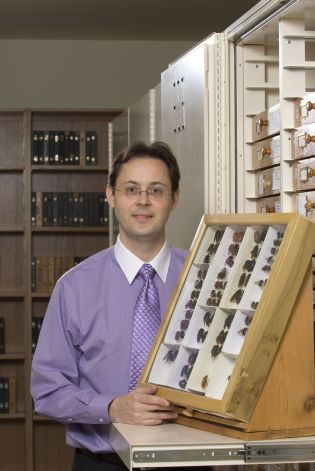 Michael, your lab at the University of Kansas must be among the most active in researching and publishing in the field of paleoentomology.  In fact, the seven-volume Treatise on the Isoptera of the World, which was just published in April and which you coauthored, presents an exhaustive study of every aspect of living and fossil termites, part of which was supported by your Guggenheim Fellowship.  To most people, termites are thought of only as pests that threaten homes. Would you explain why such in-depth knowledge of termites past and present is important?

It is true that termites are often pests and this certainly makes their study paramount so that we can learn to manage them in a sustainable manner.  However, only a relatively minor proportion of the world’s 3100+ species of termites are pests but still wield a tremendous impact on our world ranging from the turn over of soils and breaking down plant material for nutrient cycling, to contributing significant proportions of particular gases to our atmosphere.  In terms of their ecological impact, termites are certainly one of the dominant groups in most environments, natural and managed, throughout the world.  Termites live in intricate societies and have a broad range of remarkable behaviors, including having evolved agriculture millions of years before humans.  These Lilliputian neighbors are deserving of our awe.  For my part, any understanding of a group of organisms is intimately dependent on a fundamental knowledge of their past.

History shapes everything we are and do, and the distant past cannot be ignored.  If we hope to understand why termites are found only in certain habitats or why their diversity is structured in specific ways, it requires a knowledge of their origins, episodes of diversification, and what events, both intrinstic and extrinsic, have impacted their ancestors during all of those periods leading to the present day.  Paleontology permits us to address ultimate questions: from what did termites evolve? when in the past and in what paleoecological context did the earliest termites diversify? what past abiotic events led to declines or increases in their diversity? which groups of termites were most successful, and why? what caused termites to become extinct in some parts of the world, while persisting in others? what was the effect of past climate change on termites?  By answering these questions, we can better understand the fauna with which we share this world and grapple with how future events, such as human-induced climate change and habitat degradation, may affect us both.

You’ve been studying bee evolution and biogeography, among other aspects of these insects, since your days as a doctoral student at Cornell University. It’s much easier for laymen like me to see the relevance of research on bees, given the reports we’ve all seen of both a drop in bee populations, and the advance of “killer bees,” especially if it leads to a resurgence of these important pollinators or an impediment to the dangerous variety.  But how might your study of bees caught in amber 45 million years ago, and a reconstructing of the evolution and geographic ranges of bees over the millennia, for example, impact either of these issues?

Bees, with around 20,000 species, are the preeminent pollinators and it is vital that we conserve them worldwide.  Every third bite of food we take is thanks to a native pollinator.  We are in an era of human-induced climate change and habitat destruction, and this has had and will continue to have a profound influence on our native bees.  A holistic understanding of bee evolution permits us to see how more distant events have impacted their diversity and distributions, and thereby give us a greater perspective on how analogous events happening now, but over much briefer evolutionary timescales, will negatively alter bee populations and species.  Shifting distributions of bees today can be put into the context of their past biogeography as well as current ecological niche modeling.  Only through such combined approaches can we begin to tease out ecological parameters currently impacting species and the influence of history (niche conservatism).  No one approach has the whole answer.  Our best explanations and solutions will come from a synthesis of diverse fields, paleontology included.

As an undergraduate at the University of Kansas, you had planned to pursue a career in either medicine or chemistry.  How did you end up devoting yourself to paleoentomology?

My move into paleoentomology was gradual and serendipitous.  Naturally, I had already been predisposed to paleontology by a childhood obsession with dinosaurs.  By high school I had become interested in chemistry and so in college I “double degreed” in chemistry and cell biology, and figured my only career option was medical school.  Early on, however, I took a colloquium which exposed us to the diversity of research done by faculty across the biological sciences and there I met Byron Alexander, who was working on the evolution of the dance language of honey bees.  His work fascinated me and I was soon in contact with other entomologists, such as Charles D. Michener (a past Guggenheim Fellow, 1955), Orley “Chip” Taylor, and Deborah R. Smith.  They cultivated my interest and by the time of graduation I was applying to entomology programs as well as medical schools, ultimately choosing insects and Cornell University, and the career path that by that time clearly held my greatest interest.  Upon entering Cornell I studied a group of tiny metallic green bees called the Augochlorini and, like most entomology programs of the time, was told in my courses that the fossil record of insects was meager and largely uninformative outside of novelties such as giant “dragonflies” from the Paleozoic.  Nonetheless, early on in my work, my advisor mentioned seeing two fossil augochlorine bees preserved in amber from the Dominican Republic.  I quickly became engrossed by the idea of incorporating fossils into my study.  Shortly thereafter tragedy struck and my advisor, George Eickwort, was killed in an automobile accident.  I struggled for a time afterwards, but then resumed my work and set out to investigate those fossils he had seen.  This led me to David Grimaldi, someone who ultimately became my closest colleague and a dear friend.  Grimaldi brought the two fossils to me and really encouraged my passion for insect paleontology.  I described the first fossil of the Augochlorini not long afterward and dubbed it Oligochlora eickworti, honoring the memory of George, who had guided me and first hinted at the existence of these species.  All of this awakened my childhood passions in paleontology and I found it possible to merge my two great academic loves —insects and fossils.  From that point forward, I’ve been working on living and fossil insects.  To my mind it is an artificial distinction to choose between studying living and fossil insects; there is after all a continuous genetic line connecting our modern species with their distant ancestors.  All entomologists should be paleoentomologists, and vice versa.

In the late 1990s you were the first person to “elucidate the patterns of evolutionary development and numbers of origins of social behavior in the higher bees based on a paleontological perspective” (to use your words) and your discovery of the oldest fossil insect was reported in Nature in 2004. What do you view as your most important scientific achievement?

I’m not really sure any one scientific discovery was more important than another, as each has had its own influence in different areas of insect diversity.  I think there are two that I myself am most excited by, each in very different branches of insect science.  The first was the discovery of the oldest fossil insect and its unexpected implications for the origins of flight.  Insects were the first to evolve flight, perhaps as much as 400 million years ago, and this discovery pushed that evolutionary event back 170 million years prior to the evolution of flight among vertebrates.  Insects solely dominated our Earth’s skies for more than two and half times as long as it has been since the extinction of the non-avian dinosaurs.  Flight was one of many factors that contributed to the dramatic success of insects, and did so early in their history.  The other would be the discovery of an unexpected diversification of extinct social bee lineages up to the Eocene, the last global greenhouse, and the loss of much of this diversity after that epoch.  Those fossils demonstrated that sociality had evolved a single time in that lineage, diversified in ways previously unknown, and then much of this was lost.

Michael, your work has taken you from Panama to Kyrgyzstan, and from the Negev Desert to the Arctic, and beyond.  Do you have any fieldwork planned currently?

I’ve actually just returned from a rather active period, having been in Germany, Saudi Arabia, Lebanon, Brazil, and Costa Rica over the last five months.  For the remainder of this semester I’m taking a break and teaching but will dive back in early in 2014.  In January I am off to Ethiopia to look into fossil insects from the Oligocene, the first period after the cooling of our world from the last global greenhouse, and then back to Saudi Arabia where colleagues and I are documenting the diversity of native bee pollinators from around the Arabian Peninsula.  Plans are also afoot for fieldwork in China, India, Peru, Chile, Namibia, Tanzania, Kenya, and Southeast Asia.

Now that Treatise on the Isoptera of the World is completed, do you have another major project in the works?

At some point I would love to write a new edition of Evolution of the Insects, a comprehensive overview of insect evolution that my close colleague David Grimaldi and I published in 2005.  That work spurred a renaissance in paleoentomology and as a result there is so much new and revised information that a completely new edition is needed.  At this stage, it is merely finding the time (perhaps a sabbatical) in which to sit down to start the writing.  The other big work is a synthesis of bee diversity in the New World tropics, with Charles D. Michener and Victor H. Gonzalez.

A fossil termite in Baltic amber, about 45 million years old. 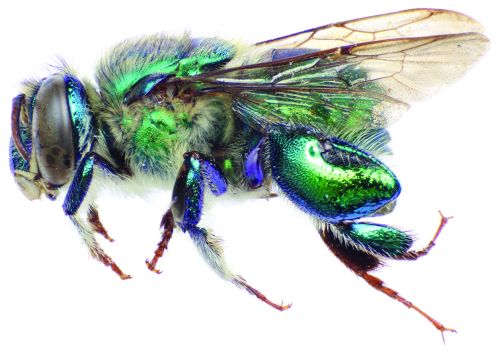 An image of a new species of orchid bee we discovered and published in 2011.  Its name is Euglossa obrima. 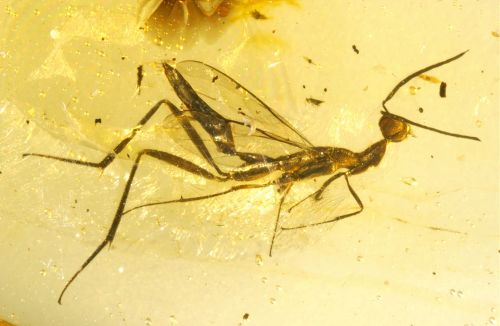 A fossil wasp, Leptofoenus pittfieldae. The specimen is preserved in amber from the Dominican Republic and is about 19 million years old. 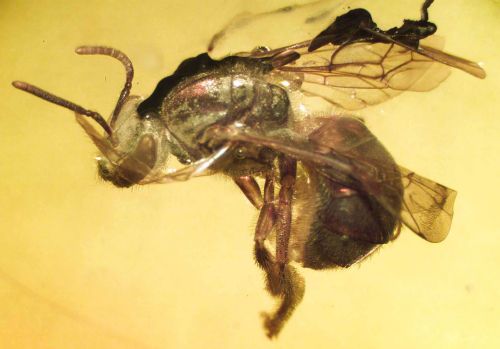 Oligochlora eickworti. The specimen is preserved in amber from the Dominican Republic and is also about 19 million years old.