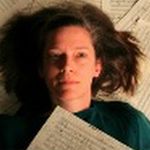 Her music has been heard in Japan, the Soviet Union, Colombia, Australia, and Vietnam, as well as across the United States and Europe.  She has received grants, awards, and commissions from Orpheus, St. Luke’s Chamber Ensemble, New Band, the Asian Cultural Council, the US/Japan Friendship Commission, th Cary Trust, and NYFA. She is the only musician to have both played with Orpheus and also written for them; Orpheus commissioned Lost Waltz in 1997 and premiered it at Carnegie Hall.  Other notable pieces include Piranesi for theremin and string quartet, with video by Lothar Osterburg; her chamber opera Rural Electrification (2006), for theremin, voice, and recorded sound, funded by a Barlow commission; Collected Visions, an instalation done in collaboration with photographer Lorie Novak, which has been presented by the International Center of Photography in New York City, the Smithsonian Institution, and the Center for Creative Photography in Tucson; Delirium, featuring the original microtonal instruments of American composer/inventor Harry Partch, performed by Newband to open the 2001 Bang On a Can Marathon at BAM’s Opera House; and Migration, for shakuhachi and strings, which was included on CRI’s Emergency Music: Band On A Can Live Volume 2, and has been widely performed. Ms. Brown was artist-in-residence at the Hanoi National Conservatory of Music in 2002, through a grant from the Asian Cultural Council.  Her solo CD, Blue Minor: Chamber Music by Elizabeth Brown, was released in 2003 by Albany Records.

Ms. Brown began studying shakuhachi (traditional Japanese bamboo flute) in 1984 after hearing the instrument on a concert tour of Japan, and its music has been a major influence on her musical language.  Featured as composer and soloist at the World Shakuhachi Festival 2008 in Sydney, Australia, and teh 2004 Big Apple Shakuhachi Conference in New York, she has also given solo moonlight shakuhachi performances as artist-in-residence in Maine’s Acadia National Park, in the sculpture quarry of the Lacoste School for the Arts in Provence, and in Isle Royale National Park, a U.S. Biosphere Reserve in the middle of Lake Superior.  She has been a Fellow at the Rockefeller Foundation’s Bellagio Center in Italy and at the MacDowell colony, and has been composer-in-residence at the Bravo! Vail Valley Music Festival, the Cape and Islands Chamber Music Festival, and the Bennington Chamber Music Conference and Composers’ Forum of the East.

Currently, Ms. Brown is collaborating with animator Steven Subotnick on a new project, Lullabye.  In 2007, her music for maveric game designer Eddo Stern’s Darkgame was part of the inaugural show of Laboral, a new-media museum in Gijon, Asturias, Spain.  In December 2008 her concerto for theremin and Partch instruments, commissioned by Montclair University’s Partch Ensemble, was premiered by that group, and in October 2008 her new work for Tom Buckner’s Interpretations series premiered.  Ms. Brown played the solo theremin part in Gavriil Popov’s First Symphonic Suite with the American Symphony at Lincoln Center in January 2008.  She continues to perform as a flutist with a number of New York-based ensembles, including Orpheus, American Symphony, American Composers Orchestra, Brooklyn Philharmonic, New York City Ballet Orchestra, and Flute Force.

Elizabeth Brown was born in 1953 in Camden, Alabama, where she grew up on an agricultural research station.  After receiving a Master’s degree in flute performance from the Juilliard School in 1977, she started composing.  She now lives in Brooklyn with visual artist Lothar Osterburg, and enjoys reading, gardening, quilting, and birdwatching.