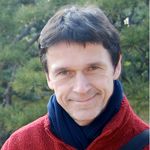 The work of photogravure master printer, sculptor, and filmmaker Lothar Osterburg is driven by images that are burned into his memory and persistently resurface. He recreates these images by building small-scale scenes quickly and intuitively from readily available, found materials. Continually undoing and redoing, Mr. Osterburg allows his imagination to fill gaps in his knowledge or to completely transform the image. He then photographs the scenes and finally prints them as photogravures. Cleared of superfluous detail by time, and altered during their re-creation, his remembered images take on a timeless, archetypical quality. Since 2005 he has collaborated with his spouse, composer Elizabeth Brown, herself a Guggenheim Fellow in 2007, on animation video projects.

Born in Braunschweig, West Germany, in 1961 he received his final degree with honors in printmaking and experimental film from the Hochschule für Bildende Künste, Braunschweig. After immigrating to the U.S. in 1987, he worked as master printer at Crown Point Press in San Francisco, where he gained professional printing experience, learned the process of photogravure, and worked with many outstanding artists. Four years later he started his own print studio specializing in photogravure, moving it to New York City in 1994 and to Brooklyn in 2003.

He received an Academy Award in Art from the American Academy of Arts and Letters and a Bard College research grant in 2010, a grant from the AEV Foundation, two New York Foundation for the Arts grants for printmaking, and a Concordia Career Advancement Grant. He was awarded three residencies at MacDowell, and at the Virginia Center for the Creative Arts in 1999. He joined Elizabeth Brown at the Liguria Study Center of the Bogliasco Foundation, Bellagio, for residencies in Acadia National Park and Isle Royale National Park, and on a JUSF Cultural Exchange grant in Japan.

Exhibition highlights include a solo show at the III Print Biennial at ICPNA in Lima, Peru, shows at the Fitchburg Art Museum, the Cantor Fitzgerald Gallery, Haverford College, and the Zoller Gallery, Penn State University. In New York his work has been shown in solo shows by Lesley Heller Gallery and Moeller Fine Art. He has also exhibited his work in the San Francisco Bay Area in shows at Traywick Gallery, Show n’ Tell Gallery, and Hatley Martin Gallery. Others solo shows include Wendy Cooper Gallery in Madison and the Yukiko Lunday Gallery in Houston. Mr. Osterburg’s work is included in the collections of the New York Public Library, the Art Institute of Chicago, the Fine Arts Museum Houston, the Fitchburg Art Museum, the Chazen Museum of Art in Madison, the Jersey City Museum, and the Library of Congress.

Mr. Osterburg is on the faculty of Bard College and the Cooper Union.