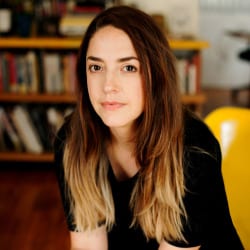 Alexandra Cuesta’s films and videos combine experimental film traditions along with documentary practices, and investigate the reciprocity of the gaze in time based representation. Some of the ideas she explores include the construction of place, instances of displacement, and social structures. Her images often depart from the public sphere, and highlight the poetics of the common experience. As film scholar and critic Nicole Brenez states, Cuesta’s cinema has the capacity to unveil, within Merleau-Pontian terms, “the astounding ‘gloria’ of the ordinary”. She received her MFA in Film and Video from the California Institute of the Arts and her BFA in Photography from Savannah College of Art and Design. In 2018 she was awarded a MacDowell Colony Fellowship and residency.

In addition to being a filmmaker and working artist she is also an educator, and has worked in higher education, museum educational programs, and in the non-profit arts sector. Most recently she held an appointment as a Tenure Track Assistant Professor of Cinema at Binghamton University – SUNY.

Desde Aquí (From Here) is an experimental documentary that explores the life of the inhabitants of Susudel, a small community in the Andes mountains in southern Ecuador. The film addresses the complicated post-colonial legacy of land ownership, labor, and migrations, particular to the region, while simultaneously constructing a portrait of place, which permeates between the exterior landscape and the private/ intimate scape. The film is currently in development.