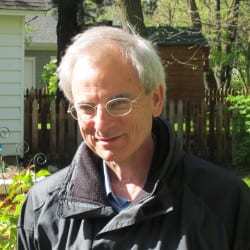 Aaron Fogleman is a Presidential Research Professor in the History Department at Northern Illinois University and works in the fields of Early America and the Atlantic World, 1492-1867. He completed his studies at Oklahoma State University (B.A.), the Albert Ludwigs University in Freiburg, Germany (M.A.), and the University of Michigan (PhD). After teaching in the History Department of the University of South Alabama from 1991 to 2002, he moved to Northern Illinois University. He has also been an Alexander von Humboldt Research Fellow, Fulbright Honorary Senior Scholar, and guest researcher at the Max Planck Institute for History in Göttingen, Germany in 1996-97 and 1999, and he held the Fulbright Distinguished Chair in American Studies at the Goethe University in Frankfurt am Main in 2008-09. Fogleman’s research addresses the themes of transatlantic migration, gender, religion, and revolution in early America and the Atlantic World.

During his year as a Guggenheim fellow, Fogleman will be working on a book tentatively entitled “Immigrant Voices: European and African Stories of Freedom, Unfreedom, and Identity in the Americas through Four Centuries.” This project investigates hundreds of English, Irish, German, Spanish, and other European “immigrant voices” (letters, diaries, and memoirs) from the Americas, as well as more than 150 narratives of enslaved Africans to explore free and unfree migrant hopes, dreams, fears, expectations, and goals in the Americas, as well as the realities of their experiences and what they thought they had become – their identity as transatlantic migrants. These voices describe how people moving between two worlds sought escape, freedom and fortune, adventure, and religious experiments. They also describe how people struggled to survive, seek justice in contradictory environments of freedom and unfreedom, return home, or make sense of what happened to them.

His previous books include Hopeful Journeys: German Immigration, Settlement, and Political Culture in Colonial America, 1717-1775 (University of Pennsylvania Press, 1996), Jesus Is Female: Moravians and Radical Religion in Early America (University of Pennsylvania Press, 2007), and Two Troubled Souls: An Eighteenth-Century Couple’s Spiritual Journey in the Atlantic World (University of North Carolina Press, 2013), which won the 2014 James Rawley Prize from the American Historical Association for the best book in Atlantic History. He has published articles in Atlantic Studies, The Journal of American History, The William and Mary Quarterly, Historische Anthropologie, and elsewhere.