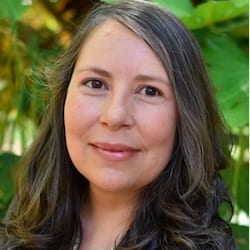 Adriana Darielle Mejía Briscoe is known for studies of how vision mediates ecological interactions between butterflies, host plants, and the environment, in the context of mimicry and species recognition. Her discoveries have been featured on radio, television and in museums both in the U.S. and in Europe. She has written and spoken about the importance of teachers in developing future scientists and the need for increased funding for teacher training in order to create a more just and diverse scientific workforce. Her research has been featured in the Los Angeles Times, the Philadelphia Inquirer, U.S. News and World Report, National Geographic, Scientific American, and Le Monde. Briscoe previously held a research fellowship at St. John’s College, University of Cambridge, U.K. She is an elected Fellow of the American Association for the Advancement of Science and the California Academy of Sciences, and she was honored with the Distinguished Scientist Award from the Society for the Advancement of Chicanos/Hispanics and Native Americans in Science, the first woman and third person overall to have been given all three of these awards. Her writing has appeared in the Conversation and other media outlets. More information about her work can be found on her website.