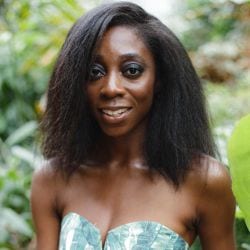 Akosua Adoma Owusu (born January 1, 1984) is a Ghanaian-American filmmaker, producer and cinematographer whose films and installation work address the collision of identities, where the African immigrant located in the United States has a “triple consciousness.” Owusu interprets Du Bois’ notion of double consciousness and creates a third cinematic space or consciousness, representing diverse identities including feminism, queerness and African immigrants interacting in African, white American, and black American culture.

Owusu’s films have screened internationally in festivals like Rotterdam, Locarno, Toronto, MoMA, AFI, New Directors/New Films, BFI London Film Festival and the San Francisco International Film Festival among others. She was a featured artist at the 56th Robert J. Flaherty Film Seminar programmed by renowned film critic Dennis Lim. In 2015, Owusu was named by Indiewire as one of 6 pre-eminent Avant-Garde Female Filmmakers Who Redefined Cinema.

Her short film On Monday of Last Week (2018) based on a short story of the same name in celebrated author Chimamanda Adichie’s collection, “The Thing Around Your Neck” was nominated for a 2017 African Movie Academy Award and screened at the Fowler Museum, ICA London and 25th New York African Film Festival co-presented by the Film Society of Lincoln Center.

Reluctantly Queer (2016) was nominated for the Golden Bear and Teddy Award at the Berlinale and won the Audience Award for Best International Short at Baltimore International Black Film Festival. Kwaku Ananse (2013) received a Golden Bear nomination at the 2013 Berlinale and won the 2013 African Movie Academy Award for Best Short Film. Me Broni Ba / My White Baby (2009) garnered critical acclaim at over 100 international film festivals and museums; picking up a distribution deal with The Cinema Guild.

She has received numerous grants including the John Simon Guggenheim Fellowship in the Creative Arts (2015), Art Matters Foundation (2012) and the Africa First award (2012) sponsored by Focus Features. She participated in residencies at the MacDowell Colony, Camargo Foundation and most recently at the Goethe-Institut Vila Sul in Salvador-Bahia.

Owusu’s work is included in permanent collections of the Whitney Museum of American Art, of the Centre Pompidou and of the Fowler Museum. She holds MFA degrees in Film & Video and Fine Art from California Institute of the Arts and received her BA in Media Studies and Studio Art with distinction from the University of Virginia. Currently, she divides her time between Ghana and New York, where she works as a Visiting Assistant Professor at the Pratt Institute in Brooklyn. Her films are produced under her production company Obibini Pictures LLC.