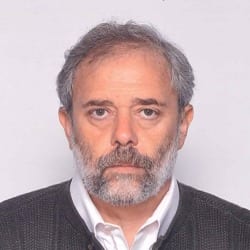 Alberto E. Saal was born in Córdoba, Argentina. He received his Ph.D. in Geology from the Geology Department at the Universidad Nacional de Córdoba in 1993. He moved to the USA, where he obtained M.Sc. in Geochemistry at the Massachusetts Institute of Technology in 1994, and a second Ph.D. in Oceanography at the Massachusetts Institute of Technology/Woods Hole Oceanographic Institution joint program in 2000. Alberto continued his studies as a postdoctoral fellow at the Lamont-Doherty Earth Observatory (LDEO) of Columbia University in 2001 and became Associate Research Scientists at LDEO and Storke-Doherty Lecturer at the Department of Earth and Environmental Sciences, Columbia University until 2003. In 2003 he joined the faculty of the Department of Earth, Environmental and Planetary Sciences at Brown University.

Alberto uses high-precision isotope, major, trace and volatile element analysis of geo-materials to understand the formation and evolution of the Earth and the Moon. The main objective of his work is to determine the composition, age, spatial scale, distribution and formation processes of the different reservoirs that form the Earth and its satellite. Amongst his most important scientific contributions are his studies on the content and origin of the volatiles in the Moon and Earth interiors. Results of those studies have produced a paradigm shift, challenging the long-standing views on the formation and evolution of our planet and its satellite. Alberto also provided major insights into the nature and origin of chemical heterogeneities in the Earth and Moon interiors by pioneering the in-situ analysis of Pb isotopes at a very high spatial resolution ~30 µm in glass inclusions (minute pieces of melt trapped in crystals that grow in the magma before eruption); and by challenging the interpretation of U-series and other chemical tracers in order to separate the geochemical fingerprints that are truly representative of the deep Earth and Moon’s interiors from those produced by shallow-level processes.