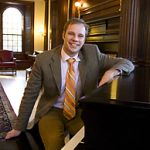 Alexander Rehding is Fanny Peabody Professor of Music at Harvard University. A native of Hamburg, Germany, he received his Ph.D. in 1999 from Cambridge University. He held postdoctoral research fellowships at Emmanuel College Cambridge, the Penn Humanities Forum, and Society of Fellows at Princeton before joining the Music Department at Harvard University in 2003. In 2005 he was an Alexander von Humboldt Foundation Fellow at the Freie Universität Berlin. During that time, he was promoted Gardner Cowles Associate Professor, and a year later, in 2006, Professor of Music. Since 2007 Mr. Rehding has been co-editor of Acta musicologica, the journal of the International Musicological Society.

His research has concentrated on the history of music theory and nineteenth- and twentieth-century music history. The works of Hugo Riemann—a key figure in music theory—have been a focus of Mr. Rehding’s research, which he explored in Hugo Riemann and the Birth of Modern Musical Thought (2003), and the Oxford Handbook of Riemannian and Neo-Riemannian Studies (forthcoming, with Edward Gollin). He has co-edited an exploration the concept of nature, employed as a foundational principle in key epochs of the history of music theory in Music Theory and Natural Order from the Renaissance to the Early Twentieth Century (2003, with Suzannah Clark). His other works in the history of music theory include a study of Jean-Philippe Rameau and Jean-Jacques Rousseau (2005), and a recent guest-edited volume of Contemporary Music Review (2006) that examines the connections between music theory and very recent compositions.

In the field of music history, Alexander Rehding has published widely on Beethoven, Liszt, and Wagner. He recently completed a book entitled Music and Monumentality: Commemoration and Wonderment in Nineteenth-Century Germany (2009) that explores the idea of monumental music—the imaginary connection between “big” sounds and “great” music and the function of such music in the collective memory.

Mr. Rehding has also worked on questions of twentieth-century music. His article “The Quest for the Origin of Music in Germany circa 1900” (2001) was awarded the inaugural Jerome Roche Prize of the Royal Musical Association. He has published on Stravinsky and Schoenberg, most recently in the guest-edited volume of Opera Quarterly on Idea and Image in Schoenberg’s Moses und Aron (2007, with Elliott Gyger). Within this area of research Mr. Rehding has been especially interested in how modern sound media—the phonograph (2005), the gramophone (2006), the radio (2006) and the siren (forthcoming)—have affected our listening habits and, more broadly, the meaning of music. The twin interests in technology and in musical thought have paved the way toward his Guggenheim project.

Alexander Rehding’s current project, entitled Notes on Sound: Studies in Nineteenth-Century Acoustics and Aesthetics, examines the relationship between nineteenth-century thinking about sound (in the sciences) and about music (in philosophy and the arts). While this relationship was often characterized by mutual suspicion, the encounter of acoustics and aesthetics was more productive than is often believed. Certain key concepts shared by acousticians and musicians provide entry points for a critical reconsideration of the cross-fertilization between these two distinct spheres of thought. In detailed inquiries into concept of Klang (sonority), the study of physiological aesthetics, technological innovations, and the eventual overcoming of certain idealist convictions, this study reconnects both sides in this recalcitrant dialogue between the sciences and the arts. Mr. Rehding’s wider aim in this study is both methodological and current: in the twenty-first century, at a time when the gulf between the sciences and the arts seems wider than ever, and when—paradoxically—the scientific study of music attracts a lot of attention again, this example from history holds some surprising lessons.