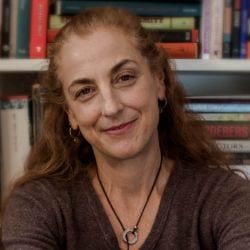 Alexandra Chasin is a writer who works across several genres. She is an Associate Professor of Literary Studies at Lang College, The New School. Chasin earned a Ph.D. in Modern Thought & Literature from Stanford University in 1993 and an MFA in Fiction from Vermont College in 2002.

Chasin is the author of two books of nonfiction: Selling Out: The Gay and Lesbian Movement Goes to Market (St. Martin’s, 1999) and Assassin of Youth: A Kaleidoscopic History of Harry J. Anslinger’s War on Drugs (U Chicago P, 2016); and two books of fiction: Kissed By (FC2, 2007) and Brief, which was first released as an interactive app (Jaded Ibis, 2012). Shorter works have appeared in several journals, including AGNI, Fence, Hotel Amerika, hyperallergic, Post Road, The Brooklyn Rail, Denver Quarterly, AlterNet, Bookforum online, Cultural Critique, and Chain, and have been reprinted in several anthologies.

Chasin has received grants from the New York Foundation for the Arts, and the New York State Council on the Arts, and fellowships from the Radcliffe Institute and the Leon Levy Center for Biography at CUNY. She holds a 2018-20 residency at New York Live Arts for the development and production of her play, Fragments, Lists & Lacunae. Chasin was the founder and Artistic Director of Writing On It All, a public participatory writing project that served New York City on Governors Island, 2013-2017. She serves on the boards of various nonprofit organizations.

Chasin is currently writing The Family of UnMan, a book about the social, environmental, and spiritual costs of the modern Western commitment to distinguishing between Homo sapiens, or “Man,” and all others. In this work, a handful of beings – a primate fossil; some women, feral children, indigenous people, and plants; a few fictional characters; and several elephants – throw inherited definitions of difference into question and offer alternative worldviews.