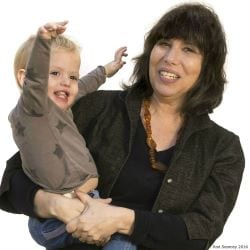 Alison Gopnik is a professor of psychology and affiliate professor of philosophy at the University of California at Berkeley, where she has taught since 1988. She received her BA from McGill University and her PhD. from Oxford University. She is a world leader in cognitive science, particularly the study of children's learning and development. She is the author of over 100 journal articles and several books including the bestselling and critically acclaimed popular books  “The Scientist in the Crib” William Morrow, 1999, and “The Philosophical Baby; What children's minds tell us about love, truth and the meaning of life” Farrar, Strauss and Giroux, 2009  and  “The Gardener and the Carpenter: What the new science of child development tells us about the relationship between parents and children” Farrar, Strauss and Giroux, 2016. She is a fellow of the Cognitive Science Society and the American Association for the Advancement of Science and a member of the American Academy of Arts and Sciences. She writes the Mind and Matter science column for the Wall Street Journal, and she has also written widely about cognitive science and psychology for a broad public audience. Photo Credit: Rod Searcey