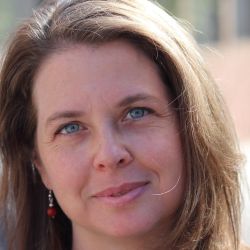 Almudena Carracedo is an Emmy award-winning filmmaker and activist. In collaboration with her producing partner Robert Bahar, she is currently making the feature documentary The Silence of Others, which explores the first attempt in history to prosecute crimes of Franco’s 40-year dictatorship in Spain. Funded by ITVS, Sundance, the Catapult Film Fund and the National Endowment for the Humanities, the film is the subject of her Guggenheim Fellowship.

Almudena previously directed the Emmy-award winning Made in L.A., a feature documentary about three immigrant women’s transformation as they fight for their rights in Los Angeles garment factories. Praised by The New York Times as “an excellent documentary… about basic human dignity,” the film premiered on PBS’ P.O.V. series in a co-presentation with Latino Public Broadcasting and won numerous awards in addition to the Emmy, including the Henry Hampton Award from the Council on Foundations, the Hillman Prize for Broadcast Journalism, the Impact Award from the National Hispanic Media Council, and Special Mention of the Jury from Spain’s Valladolid International Film Festival. Funded by ITVS, Sundance and P.O.V., Made in L.A. screened internationally at 100+ film festivals and was the subject of an innovative community engagement campaign which led to more than 600 community screenings that reached 30,000 people directly, in addition to the two million people who saw it on television. With support from the Ford Foundation, Made in L.A.’s outreach campaign concluded with the creation of an Education and Organizing Toolkit, a two-DVD set that includes the film, 6 short targeted video modules and a 100-page discussion guide, all accessible in 12 languages, which is currently being distributed by the UCLA Labor Center to organizations serving low wage immigrant workers across the United States.

Prior to Made in L.A., Almudena directed the short documentary Welcome, A Docu-Journey of Impressions, an impressionistic look at the border city of Tijuana, which won the Sterling Award at Silverdocs and played at numerous film festivals.

Born and raised in Spain, Almudena is a 2012 Creative Capital Fellow, a 2012 Sundance Time Warner Documentary Fellow, a 2010 United States Artists Fellow and the 2009 recipient of the ESTELA Award from the National Association of Latino Independent Producers (NALIP). In 2011 she was honored by Illinois Wesleyan University with a Doctor of Humane Letters, honoris causa, in recognition of her work.

She teaches Documentary at NYU Madrid, where she moved temporarily to shoot her current project. With Robert Bahar, she co-owns the Brooklyn-based production company Semilla Verde Productions Ltd.