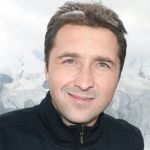 Originally from Banjaluka in Bosnia, at the age of eighteen Kobaslija fled the war-ravaged country in 1993 and arrived in refugee camps in Nuremberg, Germany. Afterwards, he traveled to Dusseldorf where he attended the Art Academy. In 1997, Kobaslija was offered asylum by the United States and immigrated to Florida. Once in Florida, Kobaslija completed his Bachelor of Fine Arts in Printmaking at the Ringling College of Art and Design in Sarasota, Florida. In 2003, he went on to pursue a Master of Fine Arts degree in Painting at Montclair State University in New Jersey. Currently, Kobaslija is an Assistant Professor of Art at Gettysburg College in Pennsylvania. He divides his time between New York City and Gettysburg, Pennsylvania.

Kobaslija has had numerous one-person exhibitions in Paris, New York, Los Angeles, San Francisco, Chicago, and Miami. He is represented by George Adams Gallery in New York where he exhibited his fifth solo show with the gallery in March 2012. In 2005, he was awarded a grant from the Joan Mitchell Foundation; the following year, he received a grant from the Pollock-Krasner Foundation. Kobaslija’s works have been reviewed and printed in publications such as The New York Times, Art in America, ArtNews, Art & Antiques, The Village Voice, New York Time Out, New York Magazine, The New York Sun, The San Francisco Chronicle, and The Florida Times Union.