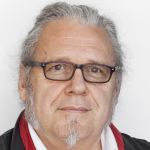 André Gaudreault (b. 1952) holds a Ph.D. in cinema from Université Paris 3–Sorbonne Nouvelle (1983). He is a full professor in the Département d’histoire de l’art et d’études cinématographiques at the Université de Montréal, where he heads the research group GRAFICS (Groupe de recherche sur l’avènement et la formation des institutions cinématographique et scénique—Research Group on the Emergence and Development of Cinematic and Theatrical Institutions), which he founded in 1994. He was, from 1997 until 2005, head of CRI (Centre de recherche sur l’intermédialité—Research Centre into Intermediality), which he founded in 1997. Since 1999 he has also been the director of the bilingual scholarly film journal CiNéMAS, published in Montreal. He is one of the five co-founders of DOMITOR (International Association for the Development of Research on Early Cinema) and was its first elected president, from 1987 to 1994. He also founded Observatoire du cinéma au Québec in 2010 at the Université de Montréal, with Denis Héroux (director, producer, and visiting professor).

André Gaudreault’s current research focuses on the digital revolution. Earlier in his career, he conducted research on early cinema, with an emphasis on the open intermedial context of the era prior to the institutionalization of cinema. Among his best known works are Du littéraire au filmique. Système du récit (originally published in 1988, this book includes a preface by the famous French philosopher Paul Ricoeur. The revised and expanded edition was published in 1999 in the renowned collection “U” by Armand Colin, Paris, and also issued in English, Italian, Chinese, and Spanish); Le récit cinématographique, with François Jost (Paris: Editions Nathans, 1991; translated into Spanish, Korean, Chinese, and Portuguese); and Pathé 1900. Fragments d’une filmographie analytique du cinéma des premiers temps (Paris: Sorbonne Nouvelle, 1993).

His recent publications include Companion to Early Cinema, co-edited with Nicolas Dulac and Santiago Hidalgo (Wiley-Blackwell, Oxford/Malden, 2012); The Kinematic Turn: Film in the Digital Era and its Ten Problems, with Philippe Marion (Montreal: caboose, 2012); Film and Attraction: From Kinematography to Cinema (University of Illinois Press, 2011); the edited volume American Cinema, 1890–1909: Themes and Variations (Rutgers UP, 2009); and From Plato to Lumière: Narration and Monstration in Literature and Cinema (University of Toronto Press, 2009). He and Philippe Marion are currently working on the book La fin du cinéma? Un média en crise à l’ère numérique (Paris: Armand Colin, forthcoming).

André Gaudreault had the privilege of being the first Canadian film scholar to be awarded the prestigious Killam Grant for Research (Canada Council), in 1996. He received the AQEC-Olivieri Award for the best Canadian film book published in 1993 (Pathé 1900). He has also received the Jean Mitry Award 2010 (Giornate del Cinema Muto), an international award to individuals or institutions distinguished for their contribution to the reappraisal and appreciation of silent cinema. In 2010, he was also the first French Canadian scholar invited by the Film Studies Association of Canada to deliver the Martin Walsh Memorial Lecture, an event held since 1978. He was named an honorary life member of DOMITOR (International Association for the Development of Research on Early Cinema) in 2012.

André Gaudreault has organized, in Quebec and abroad, more than fifteen national or international conferences. Recently, he co-organized in 2011, with Martin Lefebvre (Concordia University), an international conference entitled "The Impact of Technological Innovations on the Historiography and Theory of Cinema," which gathered over 100 leading scholars in film studies from all around the world at the Cinémathèque québécoise in Montreal. He is currently preparing, with Viva Paci (Université du Québec à Montréal) and Martin Lefebvre, an international conference in November 2013 to celebrate the fiftieth anniversary of the Cinémathèque québécoise. The conference topic will be "The Magic of Special Effects: Technology-Cinema-Reception" and it will bring together more than 100 scholars from all around the world. These two events are among the largest conferences ever held in the field of film studies in Canada.

For more information on André Gaudreault’s professional activities, the following websites may be consulted: