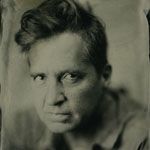 Andrew Moore, a large-format photographer for more than thirty-five years, is best known for his portfolios on Cuba, Russia, Times Square, and Detroit.  His latest project, Dirt Meridian, began in 2005 with a visit to a cattle branding at a friend’s family ranch in Keene, North Dakota.  While not flopping calves that May afternoon, Moore photographed a pristine landscape of animals, buttes, and clouds.  Little did he know that a few years later that same pastureland would be dotted by fracking sites and burn offs.

The title Dirt Meridian makes reference to the hundredth meridian, which is traditionally considered as the dividing line between moist East and arid West of North America. That line courses through a remote and sparsely populated landscape with a long history of drought, abandonment, and failed dreams. Set within the context of that harsh backdrop, the photographs present the history of this area as told by the landscape itself, while also reflecting upon the array of modern-day challenges (energy exploration, corporate agriculture, and resource management) posed to those who live amid that severe magnificence. An exhibition and publication of the complete Dirt Meridian project will be presented in the summer of 2015 at the Joslyn Museum in Omaha, Nebraska.

Moore’s photographs of Detroit were published in the bestselling book Detroit Disassembled (2010), which also included an essay by poet laureate Philip Levine.  An exhibition of the same title originated at the Akron Museum of Art, and later traveled to the Queens Museum of Art, the Grand Rapids Art Museum, and the National Building Museum in Washington, DC. His photograph of Henry Ford’s former office in Highland Park, Michigan, Model T HQ, was named picture of the year by Time magazine and was acquired by the Metropolitan Museum of Art, the Museum of Fine Arts, Houston, and the Brooklyn Museum of Art. Other photographs of his are held in the collections of the Whitney Museum of American Art, the Yale University Art Gallery, the Smithsonian, the National Gallery of Art, and the Library of Congress.

Mr. Moore’s other books include Cuba (2012), a revised edition of his images from that island that spans fourteen years of work there, Making History (2011), Russia, Beyond Utopia (2005), Governors Island (2004), and Inside Havana (2002).  Additionally, his photographs have appeared in Art in America, ArtNews, Wired, New York Times Magazine, Harpers, New York Review of Books, Fortune, TIME, National Geographic, and the New Yorker.