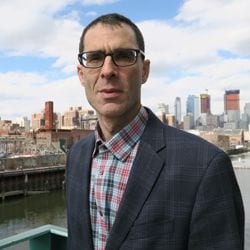 Newman is the author of two interdisciplinary books in the fields of early American, indigenous and media studies. On Records: Delaware Indians, Colonists, and the Media of History and Memory (Nebraska, 2012) examines the role of language ideologies, especially value judgements about written and spoken language, in shaping understandings of a shared past. Allegories of Encounter: Colonial Literacy and Indian Captivities was just published in January 2019 by the Omohundro Institute for Early American History and Culture and the University of North Carolina Press. It interprets early America’s best known literary genre, the captivity narrative, investigating the significances of reading, writing, and individual texts for colonists captured by Native Americans.

Newman’s Guggenheim project develops his long standing interest in English education. With the working-title Literature and the American Way: A History of the High-School Canon, it studies the intergenerational discussions about a shared set of works, including The Scarlet Letter, To Kill a Mockingbird, and a suite of Shakespeare’s plays. Inflected by the Cold War, these discussions have been part of the preparation for citizenship: an overarching theme has been the “American Way of Life”: freedom, individualism, equality, the American Dream. This book will address a general-interest audience as well as educators and specialists.