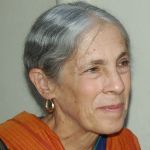 Ann Grodzins Gold is Thomas J. Watson Professor of Religion and Professor of Anthropology at Syracuse University.  Gold’s research and teaching are rooted in more than thirty years of ethnographic engagement with religion and culture in provincial North India.  Located in a single region, her fieldwork and writings concern diverse topics: pilgrimage, gender, expressive traditions, environmental history, and most recently landscape and identity in a small market town.  At the heart of all Gold's work lies a deep respect for the complex views of her interlocutors, and an unwillingness to reduce or distort these views for the sake of analytic elegance.   Daily struggles for material well-being and sincere devotional religiosity have compelled her attention, as have subtly subversive commentaries on the conditions of life offered to her by ordinary people, often speaking from stigmatized or subordinated social positions. Gold has received fellowships from the American Institute of Indian Studies, Fulbright Foundation, Fulbright-Hays, National Endowment for the Humanities, Social Science Research Council, and Spencer Foundation. Her publications include numerous articles and four books: Fruitful Journeys: The Ways of Rajasthani Pilgrims (1988); A Carnival of Parting: The Tales of King Bharthari and King Gopi Chand (1992); Listen to the Heron's Words: Reimagining Gender and Kinship in North India (1994, co-authored with Gloria Raheja); and In the Time of Trees and Sorrows: Nature, Power and Memory in Rajasthan (2002, co-authored with Bhoju Ram Gujar), which in 2004 was awarded the Ananda Kentish Coomaraswamy Book Prize from the Association for Asian Studies. As a Guggenheim Fellow, on leave from teaching and awarded a residential fellowship at the National Humanities Center, Gold plans to complete a book—Shiptown: North Indian Lives between Rural and Urban.  This work comprises an integrated series of ethnographic sketches set in the provincial market town of Jahazpur where she lived and conducted fieldwork between August 2010 and June 2011.  In Shiptown Gold seeks to portray how neighborly relations are forged and endure across lines of difference; how ancient hierarchical social structures shift in major ways while never exactly disappearing; how in spite of pervasive conservative family values, gender roles are transforming rapidly and radically; how environmental deterioration affects not only public health but individual hearts; how commerce and morality keep uneasy company.  She argues that it is worth attending to Jahazpur because its ordinary stories and everyday struggles characterize a viable twenty-first-century way of life: imperfect and troubled, aspiring and resilient.  Gold sustains a conviction that even in the globalized present, local experiences are significant, and that anthropology—that most intimate and poetic of the social sciences—continues to foster productive conversations among human beings.