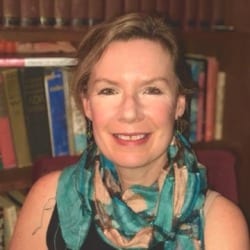 Anna Brickhouse is Professor of English and American Studies at the University of Virginia, where she currently directs the Program in American Studies and co-directs the Americas Center/ Centro de las Américas. She is also a co-editor with Kirsten Silva Gruesz of the Writing the Early Americas book series at UVA Press. Brickhouse received her BA in English and French from UVA in 1990, summa cum laude, and her PhD in English from Columbia in 1998. Her first book, Transamerican Literary Relations and the Nineteenth-Century Public Sphere (Cambridge 2004), was awarded the Gustave O. Arlt Award in the Humanities from the Council of Graduate Schools as well as Honorable Mention for the American Studies Association’s Laura Romero First Book Prize. Her second book, The Unsettlement of America: Translation, Interpretation, and the Story of Don Luis de Velasco, 1560-1945 (Oxford 2014), was supported by a fellowship from the American Council of Learned Societies. The book received the James Russell Lowell Prize from the Modern Language Association as well as the inaugural Early American Literature Book Prize (as a co-recipient), and was awarded Honorable Mention for the American Studies Association's John Hope Franklin Publication Prize. She will spend the next year working on her current book project, tentatively titled Earthquake Aesthetics: Catastrophe and the Forms of Critique.