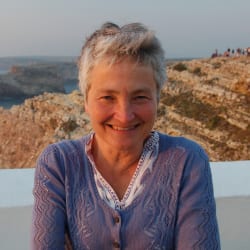 Discovering historical geography was a conversion experience for me. I had no exposure to geography in school in Kalamazoo, Michigan. There were no geography courses at Duke University. I thought of myself as a writer, editor, and sometime modern dancer well into my twenties. I encountered historical geography quite by chance while developing a new U.S. history textbook for a small publishing company in Chicago. To distinguish the book in a crowded market, the publisher decided it should be lavishly illustrated with new thematic maps. He hired Michael Conzen, an historical geographer of boundless enthusiasm and a gifted pen-and-ink cartographer, to develop the maps. Our weekly editing sessions became tutorials in how to relate history through cartography. Suddenly the past was real and exciting. Maps were a thrilling new medium of expression. They revealed the invisible patterns of human action and showed change over time. I was hooked. I applied for graduate school shortly after America’s History was published and plunged into geography at the age of thirty.

Since graduating from University of Wisconsin-Madison in 1993, I have taught geography in Welsh at the University of Wales, done much research with undergraduate students at Wellesley and Middlebury College, and recently moved to the History Department at University of Maine. All my research, and much of my teaching, uses geovisualization to reveal the invisible patterns of human action and change over time. GIS in particular has enabled me to recreate what Lee could see – and what he could not see – at the battle of Gettysburg. In Mastering Iron: The Struggle to Modernize an American Iron Industry (2013), I used GIS to explain why Americans lagged so far behind the British in developing a large-scale iron industry in the 19th century. Since 2007, I’ve worked with the Holocaust Geographies Collaborative, a group of historians and geographers, exploring how geovisualization can expand our understanding of the Holocaust. Our book Geographies of the Holocaust (2014) used GIS and cartography to visualize the many scales at which the Holocaust was implemented by the Nazis and their allies. My Guggenheim project, “Telling the Spatial Story of the Holocaust,” springs from the Collaborative’s new work on visualizing the spatiality of Holocaust victims’ experiences. How can we humanize the abstract, sterile imagery of our digital age? How can maps tell traumatic stories? How can we create a truly narrative cartography? These issues will be the focus of my Guggenheim year.