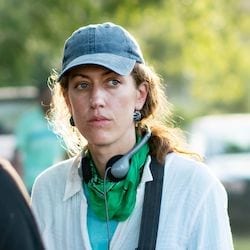 Annie Silverstein is a filmmaker and educator based in Austin. Her short film, Skunk, won the Cinéfondation jury award at the Cannes Film Festival in 2014. Silverstein’s feature debut, Bull, was selected for the Sundance Screenwriter and Director’s Labs in 2016, and premiered in Un Certain Regard at Cannes in 2019. Bull went on to receive awards internationally, including 3 Independent Spirit Award nominations in 2021. Silverstein’s documentary work has screened on PBS Independent Lens and at festivals internationally, including SXSW and Silverdocs. Silverstein often draws on her background in documentary to inform her narrative work, setting fictional stories in real communities, developing the script, and casting non-actors, in a collaboration with the members of that community.

Silverstein often cites the 10 years she spent as a youth worker prior to film school as her greatest influence. In 2004, Silverstein co-founded Longhouse Media, a non-profit Indigenous media arts organization, based in Seattle, in partnership with the Swinomish Indian Tribal Community. Longhouse Media's “Native Lens” program teaches Native youth filmmaking as a form of inquiry, community development, and cultural pride and preservation.

Silverstein is a frequent lecturer at The University of Texas, Austin, where she earned her MFA in 2010.