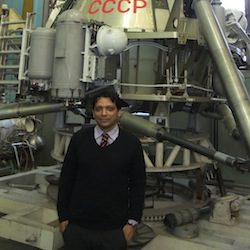 I was born in Bangladesh and raised and educated there, in the U.K., and the U.S. After a long and circuitous journey through a number of different academic disciplines, I completed my doctoral work in history at Carnegie Mellon University in Pittsburgh. For the past 14 years I have made New York City my home, where, since 2005, I have taught at Fordham University. Over the past decade, at different times, I have served as a visiting scholar at Harvard, MIT, the Smithsonian Institution, the Huntington Library, and the California Institute of Technology (where I will serve as the Eleanor Searle Visiting Professor of History in 2015-16). My academic interests touch on the history of science and technology, modern Russia, South Asia, and popular culture.

I have written and edited several books and published dozens of articles on the history of science and technology. My most recent book, The Red Rockets’ Glare: Spaceflight and the Soviet Imagination, 1857-1957 (Cambridge University Press, 2010), was a meditation on the roots of Russian fascination with the cosmos and its evolution and manifestation in space activities during the Cold War. An earlier book, Challenge to Apollo: The Soviet Union and the Space Race, 1945-1974 (NASA, 2000) was the first academic investigation into the Soviet space program that drew from records available after the collapse of the Soviet Union.

I am currently finishing a new book on Science, Expertise, and the Stalinist Gulag, writing a second one on the emergence of a postcolonial scientific elite in India, and beginning a third on the history of secrecy in the modern world. Beyond my academic work, I have contributed to museum exhibits, served on Congress-mandated committees, written for popular magazines, and produced and released my own music.

My proposed project for the Guggenheim, entitled “Departure Gates: Histories of Spaceflight on Earth,” is a cultural investigation of the more than two dozen sites around the world where humans created communities to launch objects off the planet. With the support of the Guggenheim, I hope to produce a book, an online archive, and a museum exhibit based on the research. My goal is to produce a history of the large footprint of late 20th century science framed around these launch sites, many of which have now been abandoned. Several of these places had local populations, cultures, and environments that were displaced or transformed by the activities associated with the space program. I am particularly interested in the material, social, and cultural dimensions of the involvement of global scientific elites who arrived at these places to conduct their work, representing what they believed was a universalist vision of modern science that was often at odds with local concerns.