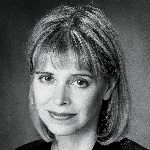 Barbara Gowdy was born in 1950 in Windsor, Ontario.  Four years later, during the most famous hurricane in Canadian history, her family moved to Toronto, where she has lived ever since.  She started writing relatively late, after failing at various other careers.  Her first novel was the unfortunately titled Through the Green Valley.  Published in 1988 to near-zero acclaim, it is blessedly out of print.

After 1988 things picked up.  Gowdy¹s second novel, Falling Angels, found publishers in fourteen countries and was made into a feature film, as was the title story from her collection, "We So Seldom Look On Love"; it became the movie Kissed.  Other stories were adapted as short features and shown at international films festivals.  "Disneyland," appeared in Best American Short Stories 1989.

She has been nominated, repeatedly, for every major Canadian book prize, including The Giller Prize, The Governor General's Award for Fiction and The Roger's Writers' Trust Fiction Prize.  In 1996 she received The Marion Engel Award and in 2003 was long-listed for The Booker Prize.  Two years later Ben Marcus named her in Harper's magazine as one of a few "terrific" literary realists who have "pounded on the emotional possibilities of their mode, refusing to subscribe to worn-out techniques and storytelling methods."  She was appointed to The Order of Canada in 2007, and in 2008 won The Trillium Book Award for best book of any genre published in Ontario.

Der Spiegel has called her ability mind-boggling.  The Globe and Mail has named her one of the Canada¹s most accomplished and outrageous writers. Carol Shield, in The Boston Globe, said, "She writes like an angel."  As of 2012 her books have been published in twenty-four countries.