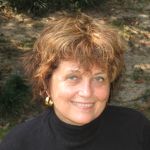 Barbara Hamby’s most recent book of poetry is All-Night Lingo Tango (Pittsburgh UP, 2009). Her first collection, Delirium, was selected by Cynthia McDonald for the Vassar Miller Prize. It also won the Kate Tufts Discovery Prize and the Poetry Society of America’s Norma Farber First Book Prize. Her second book, The Alphabet of Desire, won the New York University Prize for Poetry and was selected by the New York Public Library as one of the twenty-five best books of 1999. Her third book, Babel, was chosen by Stephen Dunn to win the AWP Donald Hall Prize.

Her poems have appeared in many anthologies, including Best American Poetry (2000, 2009, 2010), Pushcart Prize Anthology (2001), Good Poems for Hard Times, and The Paris Review Book of Heartbreak, Madness, Sex, Love, Betrayal, Outsiders, Intoxication, War, Whimsy, Horrors, God, Death, Dinner, Baseball, Travels, the Art of Writing, and Everything Else in the World, since 1953. Her magazine publications include The Paris Review, TriQuarterly, The Yale Review, American Poetry Review, Ploughshares, Five Points, and Southern Review.

She and her husband, David Kirby (2003 Guggenheim Fellow), have just edited an anthology of poetry, Seriously Funny (Georgia, 2010), a selection of serious poems that are also witty, sly, hilarious, nutty, or crazy funny, and sometimes all of the above.

She also writes fiction, and her first collection of stories, Lester Higata’s 20th Century, was selected by Paul Harding to win the Iowa Short Fiction/John Simmons Prize. The book will be published by the University of Iowa Press in Fall 2010. Her stories have appeared in TriQuarterly, The Harvard Review, Five Points, The Mississippi Review, Chelsea Review, and Shenandoah. She is working on a novel set in Hawaii, where she was raised and where her 87-year-old mother still reigns supreme.

She is Distinguished University Scholar at Florida State University, where she has been teaching for eleven years. She was also a visiting professor at the University of Houston.