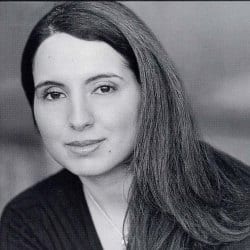 Betty Shamieh is the author of fifteen plays. Her off-Broadway premieres are The Black Eyed (New York Theatre Workshop) and Roar (The New Group), which was selected as a New York Times Critics Pick and is currently being taught at universities throughout the United States.

Shamieh was named a UNESCO Young Artist for Intercultural Dialogue in 2011. She was selected as the winner of The Playwrights' Center’s McKnight National Residency and Commission. Her European productions in translation include Again and Against (Playhouse Theater, Stockholm), The Black Eyed (Fournos Theatre, Athens), and Territories (co-production of the Landes-Theatre and the European Union Capital of Culture Festival). Again and Against was presented in Russian translation as part of the American Seasons in Russia/U.S.-Russia Presidential Bi-lateral Commission and the Lark Play Development Center. As Soon As Impossible was commissioned by Second Stage through the Time Warner Commissioning Program. The Machine was directed by Marisa Tomei and produced by Naked Angels. Her play, Free Radicals, was commissioned by Het Zuidelijk Toneel (Holland). Territories was commissioned by Trinity Rep, developed at Al-Harah Theatre, and presented at the Bethlehem Peace Center with support from the Doris Duke Foundation. In 2012, Princeton University’s Institute for Advanced Studies presented the world premiere of a suite of arias from Territories, an opera based on her play. She was commissioned by Denison College in 2014 to write the libretto and co-write the lyrics of Malvolio, an original musical and sequel to Shakespeare’s Twelfth Night. As a performer, Shamieh acted in her play of monologues, Chocolate in Heat, in three extended off-off-Broadway runs and over twenty university theatres. She began performing in work-in-progress presentations of The Alter-Ego of an Arab-American Assimilationist (a performance art-lecture) at colleges in 2012. She recently completed Permission, her first novel.

A graduate of Harvard College and the Yale School of Drama, she was a recipient of a National Endowment for the Arts/Theatre Communications Group residency at the Magic Theatre. Shamieh was selected as a Clifton Visiting Artist at Harvard in 2004 and named as a Playwriting Fellow at Harvard University's Radcliffe Institute for Advanced Studies in 2006. Shamieh has taught at Columbia/Barnard, Denison College, and Marymount Manhattan College. She is a member of New Dramatists. an affiliated artist at the New Group, and a New York Theatre Workshop Usual Suspect. Her works have been translated into seven languages.