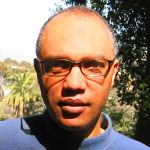 Billy Childs was born in Los Angeles in 1957, to Joseph and Mable Childs.  Having demonstrated an aptitude for piano as early as age six, he developed rapidly, and at age sixteen entered the Community School of the Performing Arts, a preparatory music program sponsored by the University of Southern California, studying theory with Marienne Uszler and piano with John Weisenfluh.  In 1975 he entered USC as a composition major, graduating four years later with a bachelor of music in composition, under the tutelage of Robert Linn.

Since then, Mr. Childs has received a number of orchestral commissions, including Tone Poem for Holly (1993) and Fanfare for the United Races of America (1994), both commissioned and premiered by Esa-Pekka Salonen and the Los Angeles Philharmonic; The Distant Land (1995) by the Akron Symphony Orchestra under the baton of Alan Balter; and concerto for Percussion and Concert Band (1986) by the North Texas State Wind Orchestra, conducted by Eugene Corporan.  His cantata, Just Like Job, also commissioned by the Akron Symphony Orchestra, had its world premiere on March 15, 1997.  Shortly after the completion of Just Like Job, Billy Childs then commenced work on A Day in the Forest of Dreams, written for woodwind quintet and piano and commissioned by the Dorian Wind Quintet.  The work was premiered in September 1997 at Merkin Hall in New York City, and was recorded in spring of 1998.  In early 2004, he completed For Suzanne, a commissioned composition for the Los Angeles Philharmonic, which was premiered by Mr. Childs, the L.A. Philharmonic, and Dianne Reeves, on January 24, 2004, in the newly constructed Disney Concert Hall, designed by Frank Gehry.  In October 2004 he completed The Fierce Urgency of Now, a musical setting of various texts by Dr. Martin Luther King Jr. It was performed by Billy Childs, Wynton Marsalis, and the Lincoln Center Jazz Orchestra as part of the inaugural concert series for the new Jazz at Lincoln Center facility.  On April 24, 2005, his cantata for the Los Angeles Master Chorale, entitled The Voices of Angels, was premiered at the Walt Disney concert hall.  After the performance, Mr. Childs, soloist Luciana Souza, and conductor Grant Gershon received a ten-minute standing ovation and three curtain calls.  In 2007 the American Brass Quintet commissioned him to compose a piece for piano and brass quintet; Two Elements was premiered by Mr. Childs and the American Brass Quintet at the Aspen Music Festival in July of that year and recorded in New York City in 2008.  It will be released in 2010 as part of the American Brass Quintet’s fiftieth-anniversary recording.

Billy Childs’ solo jazz recording career began in 1988, when he released Take For Example, This . . . , the first of four critically acclaimed albums on the Windham Hill Jazz label.  He followed that album with Twilight Is Upon Us (1989), His April Touch (1992), and Portrait of a Player (1993). On his leaving the Windham Hill label, his long friendship with Chick Corea resulted in Mr. Corea’s asking him to join his new label, Stretch Records; his next album, I’ve Known Rivers on Stretch/GRP (now Stretch/Concord) was released in 1995. That release was followed by The Child Within on the Shanachie label in 1996.

Billy has received eight Grammy nominations. In 1996 and 1997, he was nominated three times for a Grammy award: twice for best instrumental composition (for “The Starry Night” from I’ve Known Rivers in 1996 and for “Aaron’s Song” from The Child Within in 1997) and once for best performance by a jazz group (for The Child Within, in 1997).  In 2002, he received a fourth Grammy nomination, for his arrangement that accompanied vocalist Dianne Reeves’ performance of “Fascinating Rhythm” on The Calling—Celebrating Sarah Vaughn. His Jazz-Chamber Ensemble was awarded a sizeable grant by Chamber Music America to perform in a venue of his choosing.  Lyric (2005), recorded with that group, was nominated for three Grammys in 2006: best instrumental composition (“Into the Light”), which he won; best instrumental arrangement (“Scarborough Faire”); and best jazz CD (Lyric). In addition that year Billy Childs himself won the Grammy for best arrangement accompanying a vocalist, for his arrangement (with Gil Goldstein and Heitor Pereira) of “What Are You Doing the Rest of Your Life?”

As a pianist Billy Childs has recently performed with Yo-Yo Ma, Sting, Jack DeJohnette, the Ying String Quartet, and the American Brass Quintet, among others.  Currently, he is scheduled to work on a violin concerto for Regina Carter and the Detroit Symphony (Leonard Slatkin conducting), a woodwind quintet for the Imani Wind Quintet, a new piece for the Los Angeles Master Chorale, a string quartet for Pacific Serenades, and music for the compilation CD Jazz/Chamber Music, Vol. 2, to be performed and recorded by the Jazz Chamber Ensemble with the Ying String Quartet.

For the last ten years or so, I’ve been developing—through performance, rehearsal, and recording—my jazz-chamber ensemble.  The term “jazz-chamber” is one that I feel best describes the intent of my group because it has, as its central concept, the symbiotic synthesis of America’s classical music, jazz, and European classical chamber music.  The challenge lies in making the two disciplines (jazz and European classical) come together as a seamless, organic whole—essentially a new form of music.  I approach this challenge compositionally; that is to say, I make it the responsibility of the composition to make all the various (sometimes disparate) elements congeal into a singular work.  One way that I do this is to utilize mainly compositional devices to find commonality between the two genres.  The string quartet, for instance, would be playing music that is idiomatic to the lineage of string quartet literature, but the passage might be used as the accompaniment to a jazz soloist.  Likewise, the rhythm section might play a passage that interpreted stylistically in a jazz-fusion mold, but composed as a fugue.  A solo section may be used as transitional material.

It is my goal [as a Guggenheim Fellow] to compose a multi-movement suite for the Billy Childs Jazz-Chamber Ensemble and the Ying String Quartet, to be recorded this year and performed on tour in venues across the United States throughout the 2009-10 seasons.

This composition will represent an important step in my journey toward creating music that makes an artistic statement through the prism of jazz and European chamber music: jazz-chamber music.