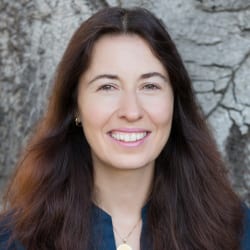 Pentcheva’s work focuses on the medieval cult of images, phenomenology and aesthetics, and recently on sound and acoustics. These fields are exemplified by her three books published with Pennsylvania State University Press: Icons and Power: The Mother of God in Byzantium, 2006; The Sensual Icon: Space Ritual and The Senses in Byzantium, 2010; and Hagia Sophia: Sound, Space and Spirit in Byzantium, 2017.

Pentcheva’s most recent monograph focuses on the Hagia Sophia in Constantinople. Using digital technology to reconstruct this aural architecture, this exploration has allowed the lost voice of the Great Church to be heard again, despite the museum’s current ban on any performance of the human voice. Pairing digital auralizations with a close examination of liturgical texts, melodic structures, and miniatures, the book demonstrates how the Great Church responded to singing by transforming the human voice into an emanation: no longer focused on the intelligibility of words, but on prosody and sensual valence. The elite choir enhanced the acoustic effects of blurring the semantics by singing music filled with melismas and intercalations. The resulting enveloping and sensually rich sound field defied the rational and the syntagmatic register of human speech, opening access to the imagined celestial sound of the angelic choirs.

Pentcheva has collaborated with Stanford Live, the Center for Computer Research in Music and Acoustics, and Cappella Romana to produce two concerts of Byzantine chant auralized live with the acoustic signature of Hagia Sophia at Stanford’s Bing Hall.

For her Guggenheim Project Pentcheva returns to the question of animation in medieval art. Since the Renaissance, Western culture has promoted naturalism and the ability of the painter or sculptor to imitate nature and produce a lifelike image. By contrast, medieval culture across the Christian–Islamic divide privileged liveliness, stemming from the changing appearance of materials like gold, enamel, and gems. The material flux was produced by ambient conditions such as the movement of diurnal light and shadows across the complex surfaces, or the flicker of candles stirred by a breeze or human breath. By employing digital technology along with the traditional textual research, this study explores the phenomenon of animation in medieval art across Byzantine, Western medieval, and Islamic art.

View The Sensual Icon: Space, Ritual, and the Senses in Byzantium, Bissera Pentcheva