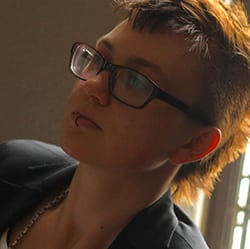 dorosh-walther’s debut feature documentary Out in the Night, tells the story of a group of young friends, African American lesbians out for a night in the summer of 2006, in the gay friendly neighborhood of New York City. They are sexually threatened and violently attacked by a man on the street. They defend themselves and are consequently charged and convicted in the courts and in the media as a ‘Gang of Killer Lesbians’ revealing how race, gender identity and sexuality are criminalized in the mainstream news and criminal legal system. According to RogerEbert.com, “This film could help influence the ongoing LGBT civil rights struggle. Everyone should see it.”

Out in the Night was funded four times by the Sundance Documentary Institute, ITVS and Fork Films. It had its international premiere at the Los Angeles Film Festival in June 2014 and has since screened in 100+ film festivals winning over a dozen awards and kicked off the 2015-2016 season of POV on PBS June 22nd, 2015 with a simultaneous broadcast on the Logo Network. Out in the Night continues it’s partnership with the United Nations’ Free and Equal Campaign to decriminalize homosexuality worldwide. dorosh-walther is diligently working towards full pardons for the four women featured in Out in the Night.

Expanding off of her first film, as Shadow & Acted reviewed, “…issues of self-defense and resistance as black women, and more specifically as LGBT people of color who continually face this type of harassment, become the main focus. Who has the right to resist?”, comes dorosh-walther’s next film, Inherently Unequal. In development, Inherently Unequal is based off of the book with the same name by historian Lawrence Goldstone, examines the legal history of equal rights through the United State’s Supreme Court. Specifically, the Court’s immediate undermining of the Thirteenth, Fourteenth and Fifteenth Constitutional Amendments in 1865-1875 and how this has impacted civil and equal rights today. dorosh-walther is also in production on a sculpture project exploring masculine female sexuality.

dorosh-walther has supported hir artistic career by working in direct care with adults living with developmental disabilities, mental illness, addiction issues, homelessness and HIV/AIDS for the past 13 years and has recently made a home on the beautiful Hudson Valley in Newburgh, New York.

Photograph credit: Image during filming of Out in the Night, photograph by Jon Goff