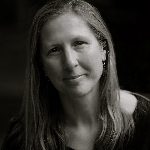 Every book Bonnie Jo Campbell has written has been a critical success. Her first story collection, Women and Other Animals (1999), published by the University of Massachusetts Press just a year after she received her M.F.A. from Western Michigan University, won the AWP award for short fiction and was translated into German; one of the stories in that collection, “The Smallest Man in the World,” was chosen for inclusion in the twenty-fifth annual Pushcart anthology. In its starred review, Publishers Weekly praised it as a “bold and eloquent debut collection. . . . Campbell’s determined, eccentric, painfully and beautifully human heroines, many of them young or poor, are touching even as they consistently remind the reader of their unpredictable, durable ferocity.” Women and Other Animals was published in German under the title Gorilla Girls (Schneekluth, 2001).

Q Road (Scribner, 2002), Ms. Campbell’s first novel, won plaudits as well. Writing in the Chicago Tribune, Lucia Perillo deemed this story of a rural community dealing with threats to their farms from encroaching development “a thoughtful, satisfying read.” Kirkus Reviews agreed, applauding “the vivid, varied cast and palpable sense of connection to the soil [that] give [the novel] a stern grandeur.” Barnes & Noble gave it an honorable mention for its top award, and selected Q Road for its list of books by Great New Writers. Rocky Mountain News named her one of the five best new writers of 2002. Scribner issued a paperback edition in 2003, and the following year Droemer Verlag published a German edition of it.

But to date her greatest success has been her second collection of stories, American Salvage (2009), which was published by Wayne State University in its Made in Michigan Writers series. Ms. Campbell describes the collection as “fourteen tough, realistic stories that investigate the kinds of people and trouble [she has] been observing in Southwest Michigan in the last decade.” American Salvage earned a starred review in Booklist and elicited comparisons to D. H. Lawrence from Alan Cheuse in his review for NPR. One of its stories, “The Inventor, 1972,” won the Eudora Welty Prize from The Southern Review, and the collection received the ForeWord award for short fiction and was named a finalist for the National Book Award, the National Book Critics Circle Award, and other honors.

Norton issued an edition of American Salvage that same year, and in 2011 published Ms. Campbell’s second novel, Once Upon a River. Critics were once again effusive in their praise of her gritty, unflinchingly realistic depiction of her main character, Margo Crane, and Margo’s world. The American Booksellers’ Association selected it for its Next List of “great reads,” Library Journal gave it a starred review, and in its starred review Booklist praised it as “a dramatic and rhapsodic American odyssey . . . a glorious novel destined to entrance and provoke.” Yet Jane Smiley in her review for the New York Times (July 24, 2011) cautioned her readers against being led by Ms. Campbell’s “realistic style and ferocious attention to her setting” to dismiss the novel “as merely a fine example of American regionalism. It is, rather, an excellent American parable about the consequences of our favorite ideal, freedom.” Writing in the Washington Post (July 5, 2011), Ron Charles was equally enthusiastic. “The wonder of Once Upon a River,” he asserted, “is how fresh and weathered it seems at the same time. . . . Without sacrificing any of its originality, this story comes bearing the saw marks of classic American literature, the rough-hewn sister of The Leatherstocking Tales, The Adventures of Huckleberry Finn, and Walden.” “Margo’s hushed voice is so pure, her spirit so indomitable, that you’ll yearn for her to find the freedom she craves,” he concludes. “It’s a hard life, to be sure, but this novel is a celebration of that possibility and its brutal costs.” Once Upon a River is currently being translated into German, Italian, French, Dutch, and Norwegian for 2012 publication.

Her poetry collection, Love Letters to Sons of Bitches, won the 2009 NYC Center for Book Arts chapbook competition, and she has had numerous poems published in The Southern Review and Midwestern Quarterly. She authored the one-act play Shooting Sparrows, which was published in Tusculum Review (2010) and staged by the Paw Paw Village Players in Paw Paw, Michigan, and numerous works of nonfiction, which appeared in Utne Reader, Blue Mesa Review, Ontario Review, Heartlands Today, and other journals and anthologies. In 2000, she edited with Larry Smith the anthology Our Working Lives: Short Stories of People & Work (Bottom Dog Press).

Ms. Campbell studied philosophy at the University of Chicago (A.B., 1984), and mathematics education (B.A., 1992) and mathematics (M.A., 1995) at Western Michigan University. She had begun doctoral work in mathematics at WMU when she decided to take a course there in creative writing; with that course, taught by Jaimy Gordon, she found a new direction for herself, and went on to earn an M.F.A. (1998). She has held visiting positions in creative writing at Bowling Green State University (1999-2000), Western Michigan University (Winter 2002), Kalamazoo College (2005), and Old Dominion (Fall 2009). Since January 2009, she has been a teaching in the Pacific University Low-Residency M.F.A. Program.

Although Ms. Campbell was raised in Michigan and now makes her home there, raising donkeys, and sets most of her writings in that state, she has travelled extensively. She was the President of Goulash Tours (1987-94), escorting sightseers on bicycle trips throughout Russia, Eastern Europe, and the Balkans, and for five months when she was twenty she travelled with the Ringling Brothers and Barnum & Bailey Circus: she “lived on the circus train, ate in the Pie Car, and sold snow cones in arenas across the country to the brilliant, blaring backdrop of the Greatest Show on Earth.” During her Guggenheim Fellowship term, she will be touching base with that circus in preparation for a future work of fiction, a series of interlocking stories set in a contemporary circus.