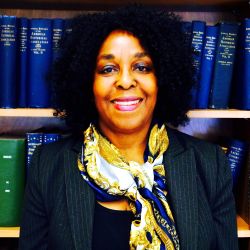 Brenda E. Stevenson is Professor of History at UCLA. Her intellectual interests center on the comparative, historical experiences of, and conflict among, women, family, and community across racial and ethnic lines. Race and gender—the ways in which these two variables interact, intersect, collide with, emphasize, run parallel to and sometimes isolate one another—are at the center of her work. Her areas of expertise include African American History, Gender and Family History, Atlantic World Slavery, and Racial Conflict. Her book length publications include: Life in Black and White: Family and Community in the Slave South (Oxford 1997); The Contested Murder of Latasha Harlins: Justice, Gender and the Origins of the L.A. Riots (Oxford 2013); The Journals of Charlotte Forten Grimke (Oxford 1988); and, What is Slavery? (Polity Press 2015).

Professor Stevenson’s research has garnered numerous prizes including the James A. Rawley Prize from the Organization of American Historians for the best book in race relations (U.S.) for The Contested Murder of Latasha Harlins, the Ida B. Wells Barnett Award for Bravery in Journalism, and the Gustavus Meyer Outstanding Book Prize for Life in Black and White. Her research has been supported by, among others, the Ford Foundation, the Mellon Foundation, the American Association of University Women, the Smithsonian Institution, the Virginia Foundation for the Humanities, the National Humanities Center and the American Academy in Berlin. She also is the recipient of the 2014 UCLA Gold Shield Award for outstanding scholarship, teaching and service. Professor Stevenson is the past Chair of the Departments of History and African American Studies at UCLA and a Distinguished Lecturer for both the Organization of American Historians and the Association for the Study of African American Life and History.

With the support of a 2015 Guggenheim Fellowship, Professor Stevenson will continue writing her research monograph, Fanny's World of Women: Generations of Enslaved Black Females in North America. This book is a study of enslaved black women and the institution of U.S. slavery from the early colonial period through the antebellum era. It begins in west and western central Africa, where it examines indigenous forms of female slavery among those societies where girls and women were drawn from to enter the transatlantic trade to the Americas. It follows the experiences of these African women as they travel to the “New World,” examining multiple aspects of their lives and those of the generations of enslaved females who were born and reared in the U.S.