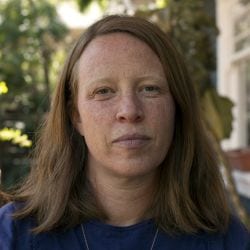 Brigid McCaffrey is a Los Angeles-based filmmaker and artist whose work documents environments and people in states of flux. Her films explore extremes of autonomy and coexistence experienced by individuals living within the precarious landscapes of the American West. Often taking shape as nuanced portraits, the films respond to the physical and emotional changes of their subjects while fusing representations of self and place.

Over the past decade, McCaffrey has created a body of work in the California desert. Each film features a wandering, often solitary figure whose experiences generate meditations on the ways in which this land is inhabited, historicized, and shaped by municipal powers and natural forces alike. Her most recent films have focused on the choices of women situated at a social and geographical periphery who challenge broadly accepted ideas about what it means to live a successful life in contemporary society.

McCaffrey has exhibited at venues such as the Hammer Museum, Los Angeles; Museum of Contemporary Art, Los Angeles; Harvard Film Archive; New York Film Festival - Projections; Rotterdam International Film Festival; and Whitechapel Gallery, London, among others. In addition to other awards and residencies, she was a featured artist at the 2016 Flaherty Seminar, and her work was selected by Ballroom Marfa as its entry in the 2015 edition of Artists’ Film International.