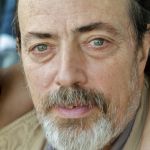 Born in Brooklyn, Bruce Gilden studied sociology at Penn State University for a short while. In 1968, photography was in the air and after seeing Michelangelo Antonioni’s film Blow Up, Gilden bought a camera and decided to become a photographer. Although he attended some evening classes in photography at the New York School of Visual Arts, Gilden is basically self-taught.

From childhood, Gilden developed a keen eye for observing urban behavior, and this led him in 1969 to start his first long-term personal project photographing in Coney Island, where he would return regularly until the mid 1980s. Coney Island was published in 2002. From 1975 to 1982, for his second long-term project, Gilden photographed the Mardi Gras in New Orleans.

In 1984, Bruce Gilden landed for the first time in Port-au-Prince. For eleven years, he would return to Haiti and explore the Haitian vitality and spirit. Haiti, published in 1996, earned Gilden the European Publishing Award for Photography. After the earthquake of January 2010, Gilden visited Haiti three more times “to keep the light burning.”

Over the years, Gilden has traveled extensively and produced other long personal photographic projects in India, Russia, and Romania. The publications of some of his work on commission include Bleus in the north of France (Mission Photographique Transmanche, 1994), and Ciganos in Portugal (Centro Portugues de Fotografia, 1998).

During these years, between trips abroad, Bruce Gilden returned to the streets of New York City, where he had been working since 1981, tackling a new approach to urban spaces. His work culminated in the publication of Facing New York (1992), and later A Beautiful Catastrophe (2005).

In 1996, Gilden’s documentation of rural Ireland was published in After The Off, a book with text by Irish writer Dermot Healey.

In 1994, on a French grant from Villa Médicis Hors-les-Murs, Gilden lived in Tokyo, Japan, for a few months and started a penetrating photographic project on Japan’s dark side. A fellowship from the Japan Foundation allowed him to continue his project on the "Yakuza,” the Japanese mafia gangs. These images were published in Go (2000).

In 2008, after depicting the Democratic and the Republican conventions in the summer, Gilden started working in Florida on the first segment of his series on foreclosures in America, No Place Like Home. After Detroit, Michigan (2009), and Fresno, California (2010), he continued his foreclosures project in Reno and Las Vegas, Nevada (2011).

Recently, Bruce Gilden worked in Rochester, New York, and in Florida on two Magnum collective projects, Postcards From America. Last November at Mois de la Photo in Paris, The Archive of Modern Conflict featured the commission Gilden has been carrying out in London since 2010. With the publication of this work and a volume in the French collection Photo Poche, three more books will highlight Gilden’s career in the upcoming months of 2013.

Bruce Gilden joined Magnum Photos in 1998. He lives in New York City with his wife and daughter.