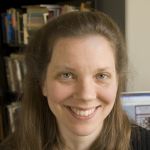 Camilla Townsend was born and raised in New York City, where she was inspired by some of some of the city’s most wonderful institutions—the American Museum of Natural History, the Heye Foundation, the Metropolitan Museum of Art, and Stuyvesant High School. She graduated summa cum laude from Bryn Mawr College and then traveled and worked in Latin America. The energy, political commitment, and hard work of the people she met there made an indelible impression. Returning to the United States, she chose to pursue a Ph.D. in comparative history at Rutgers University. From 1995 to 2006 she taught history at Colgate University in Hamilton, New York, where the keen questions of students helped her learn to communicate complex scholarly ideas to wider audiences. She is now Professor of History at Rutgers University; there the stunningly diverse population of students teaches her more every day.

Townsend’s first book, Tales of Two Cities: Race and Economic Culture in Early Republican North and South America (2000), argued against the old idea inherited from Max Weber that a Protestant work ethic was the determining factor in North America’s historical success, and instead explored the idea that the divergence between the two worlds was due to traditional relationships between wealthy citizens and the laboring populace. Increasingly convinced that early relations between European conquerors and native peoples constituted a crucial factor, Townsend decided to dedicate herself to studying indigenous history and language so that Native Americans’ perspectives could be given full weight. Since 1998, she has been embedded in the study of documents written in Nahuatl, the Aztec language. In the intervening years, she has authored two books, Pocahontas and the Powhatan Dilemma (2004) and Malintzin’s Choices: An Indian Woman in the Conquest of Mexico (2006), and edited two others, American Indian History: A Documentary Reader (2009) and Here in This Year: Seventeenth-Century Nahuatl Annals of the Tlaxcala-Puebla Valley (2010). Her work has garnered several prizes, and earned her fellowships from the American Association of University Women, the American Philosophical Society, the Fulbright Commission, the McNeil Center for Early American Studies, and the National Endowment for the Humanities.

During her Guggenheim Fellowship year, Townsend plans to analyze the historical annals written in the sixteenth and seventeenth centuries by the Nahuas (or Aztecs) in their own language. Spanish friars taught them the Roman alphabet so that they could be better Christians, but in the privacy of their own homes, the native people used the phonetic system to record their own traditional histories, which had previously been kept orally. They did this not for Spaniards, but for the sake of their own posterity. Through the texts that they produced, we can gain insight into the ways in which indigenous people conceptualized history and imagined the future.