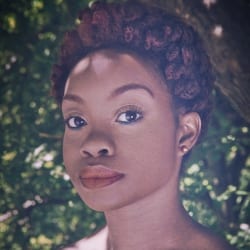 CAMILLE A. BROWN is a prolific choreographer who has achieved multiple accolades and awards for her daring works. Informed by her music background as a clarinetist, she utilizes musical composition as storytelling and makes a personal claim on history through the lens of a modern Black female perspective. She leads her dancers through excavations of ancestral stories, both timeless and traditional, that illustrate stories which connect history with contemporary culture. Her versatility is effortlessly demonstrated in works that range from light-hearted (Groove to Nobody’s Business; Been There, Done That) to spiritually based (New Second Line; City of Rain) and politically charged with comedic flare (Mr. TOL E. RAncE) to personal (BLACK GIRL: Linguistic Play).

Currently, Ms. Brown is developing a new piece with the working title “ink.” The concept for “ink” seeks to use lyricism as its fabric to de-code the albums of Hip-Hop icons from its birth in the 1970s to today, and engage audiences around the topics of race, politics, gender and cultural identity.

Initiatives: The Gathering, an annual open forum for intergenerational Black female artists to advocate for greater cultural equity and acknowledgement in the contemporary dance world; and BLACK GIRL SPECTRUM (BGS), a multi-faceted community engagement initiative that seeks to amplify the cultural and creative empowerment of Black girls and women through dance, dialogue, and popular education tools. On June 4, 2016, BGS will have its inaugural symposium with the theme “Social Dance for Social Change” at The National Black Theatre in Harlem, NY.

ARTISTIC STATEMENT
As a choreographer, I am interested in that space between dance and theater where interdisciplinary work defies category and takes flight. Music and rhythm are the main driving forces of my work. Informed by my music background as a clarinetist, I create choreography that utilizes musical composition as storytelling. I am interested in telling stories – historical and personally based – and am fascinated with tying history to my personal experiences and bringing those things to life.

By creating a vocabulary that fuses African, Hip- Hop, Jazz, Modern, Tap, Ballet, Theater, original music compositions and African-American social dances, my work often provides a platform to educate people about their origins while also exploring universal themes through movement. My company and I aim to present authentic performances that foster cultural and educational dialogues among audiences and local communities while instilling a sense of curiosity and appreciation for the live arts experience in a social and aesthetic context. We strive to build young and scholarly advocates who will help build appreciation for the field of contemporary dance within communities of color and develop our sphere of influence for cultural dialogue and reflection. Through our work we seek to speak to people, make them feel good, provoke, engage, and inspire.

Follow this link to view: Jacob’s Pillow Dance to Honor Camille A. Brown, from the New York Times.