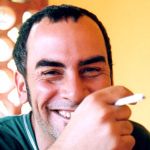 Cao Guimarães, filmmaker and visual artist, was born in 1965 in Belo Horizonte, Brazil, where he lives and works. He studied philosophy at the Federal University of Minas Gerais and completed a Masters of Arts in photographic studies at Westminster University of London.

Since the end of the 1980s he has been showing his work at various museums and galleries such as the Tate Modern, the Guggenheim Museum, CAB- Centro de Arte de Burgos, Gasworks (where he was a resident Fellow in 2006), Frankfurten Kunstverein, Studio Guenzano, Galeria La Caja Negra, and Galeria Nara Roesler. He participated in such important festivals as the XXV and XXVII São Paulo International Art Biennial, and the Insite Biennial 2005 (San Diego/ Tijuana). Some of his art pieces are in the permanent collections of Fondation Cartier Pour L’art Contemporain, Tate Modern, Walker Art Center, the Guggeheim Museum, and the Museu de Arte Moderna de São Paulo, MoMA, and Instituto Cultural Inhotim.