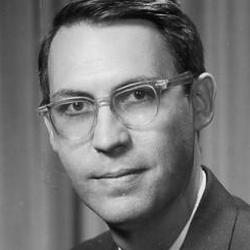 After receiving a Ph.D. degree from the University of California, Berkeley, Carl Wesley Garland joined the MIT faculty in 1953. Initial efforts to establish his research program were supported by an Alfred P. Sloan Fellowship (1954-1960), and his initial teaching involved the development of new experiments for an undergraduate chemistry course. The latter effort resulted in a laboratory textbook Experiments in Physical Chemistry (1st edition 1962) coauthored with David Shoemaker, who had been a Guggenheim Fellow in 1947. His Guggenheim Fellowship in 1963 made possible a sabbatical leave at the Cavendish Laboratory in Cambridge, England, during the 1963-64 academic year. This sabbatical set the standard for several productive later sabbaticals in Europe, mostly in France where de Gennes had stimulated world-class liquid crystal research activities.

Professor Garland’s research has concerned the study of phase transitions and order-disorder phenomena in ionic crystals like ammonium chloride, where the orientation of NH4+ ions becomes disordered at a lambda-type transition, and in liquid crystal materials. Liquid crystals are especially interesting systems since they provide a rich variety of translational and orientational ordering. The goal is to understand the role of order parameter symmetry, interaction range, and competing interactions in determining the stability of phases and the critical fluctuations near transitions between phases. In addition to the study of bulk materials, the phase behavior of liquid crystals in the fractal pores of very low density gels of colloidal aerosil particles provides an ideal way to study quenched randomness. In this case, random ordering fields due to interactions with the surface of the sil particles greatly modify the critical behavior. High-resolution experimental techniques that included computer-controlled ac calorimetry, ultrasonic spectroscopy, and synchrotron x-ray scattering were used in these phase transition studies.

During the period 1952-2009, he published more than 200 scientific papers, and an 8th edition of Experiments in Physical Chemistry was published in 2009. Professor Garland is a Fellow of the American Academy of Arts and Sciences.