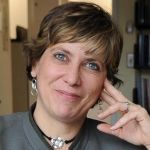 Carla Mazzio, a scholar of early modern literature and culture, earned her B.A. from Barnard College and her Ph.D. from Harvard University. She teaches in the Department of English at the University at Buffalo, SUNY, and has special research interests in literature in relationship with the history of science (particularly medicine and mathematics), the history of technology and the material book, the history of affect and sensory perception, and language ideologies and speech disorders. She is the author of The Inarticulate Renaissance: Language Trouble in an Age of Eloquence (University of Pennsylvania Press), which was awarded the 2010 Roland H. Bainton Book Prize for Literature.  By examining attitudes toward ineffectual speech in fields ranging from religion, humanism, and law to historiography and vernacular development, this book argues for the inarticulate as central subject of both cultural history and dramatic innovation. Her co-authored Book Use, Book Theory: 1500–1700 (with Bradin Cormack) argues for the importance of the category of book “use” for those who aim to understand the material history of the book in ways that resist material fetishism, on the one hand, and over-rapid theoretical abstraction, on the other.  Mazzio is also the editor of Shakespeare & Science, a special double issue of a journal that examines Shakespearean drama in light of early practices, theories, and conceptual lexicons of anatomy, cartography, botany, physics, cosmology, meteorology, experimental science, and early variants of “life science.”  In addition, Carla has co-edited three other books, including Historicism, Psychoanalysis and Early Modern Culture (with Douglas Trevor) and The Body in Parts: Fantasies of Corporeality in Early Modern Europe (with David Hillman), awarded the English Association’s Beatrice White Book Prize in 1999. The Guggenheim Fellowship will support Mazzio’s work on her book in progress, The Trouble with Numbers: The Drama of Mathematics in the Age of Shakespeare. The book, under advance contract with the University of Chicago Press, examines the affective, tensional, and often conspicuously irrational environments in which mathematics circulated in the late sixteenth and early seventeenth centuries. Mazzio will spend the year working at three institutions: the Huntington Library in San Marino, California; the Houghton Library at Harvard University, and the Venerable English College in Rome.