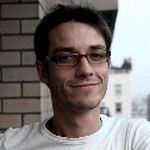 Colombian-born artist Carlos Motta works primarily in photography and video installation.  He uses strategies from documentary film and sociology to engage specific political events in an attempt to observe their effects and suggest alternative ways to write and read these histories.

For example, he traveled throughout Latin America, interviewing citizens of various countries about their opinions of U.S. foreign policy, and its affect on democracy, governance, and leadership.  The result was The Good Life, an online archive and search engine launched in September 2008 that not only allows the public to watch the interviews Mr. Motta conducted but to access them in various ways, such as by question asked, or by age, occupation, or residence of those interviewed.  This four-year project was supported in part by his Guggenheim Fellowship. To learn more about this project, see http://la-buena-vida.info.

Mr. Motta's artwork has been exhibited extensively around the world, in both solo and group shows, at such venues as the Institute of Contemporary Art in Philadelphia; Palazzo Pappesse, Siena, Italy; Konsthall C in Stockholm; the Museum of Modern Art in Bogota; and VideoBrasil in Sαo Paulo.  Likewise, his videos have been screened at a variety of international film festivals, including the Festival des Cinémas Différents de Paris; VideoBrasil; and the International Short Film Festival in Oberhausen, Germany.

His work has been supported by numerous foundations, among them Art Matters, the Lower Manhattan Cultural Council, and the Center for the Book Arts, all in New York City, as well as IASPIS in Stockholm, the Danish Arts Council, and Cisneros Fontanals in Miami, Florida.  He is the recipient of the Rhodes Family Award for exceptional achievement in photography.

Mr. Motta attended the Whitney Museum Independent Study Program and holds a B.A. from the School of Visual Arts and an M.F.A. from Bard College, educated in New York City.  He is the editor of artwurl.org and a faculty member at the International Center of Photography and Parsons The New School for Design.