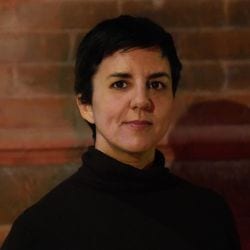 Carmen Giménez Smith, a CantoMundo fellow, was born in New York City to parents who emigrated from Peru. She received a BA in English at San Jose State University and an MFA from the Iowa Writers’ Workshop where she was a Teaching-Writing Fellow.

In 2009, the University of Arizona Press published Odalisque in Pieces, her first full-length collection of poetry. This collection considers how a woman constructs and redefines herself into womanhood. The Center for Literary Publishing published her second collection, The City She Was, an ambivalent valentine to San Francisco, and she received the the Juniper Prize for Poetry for her collection Goodbye, Flicker, which was published in 2012 by the University of Massachusetts Press.

Her third collection Milk and Filth (University of Arizona Press, 2013), a finalist for the 2014 National Book Critics Circle award in poetry. Rigoberto Gonzalez writes “Milk & Filth reads like the radicalization of the poetry of gender politics–at once assertive and suggestive–infusing a fresh energy into the discourse of sex and sexuality, defiant and resistant to the academic platitudes of yesterday.” The collection is a celebration and reconsideration of second-wave feminist politics and aesthetics that received wide acclaim.

She is also the author of the memoir Bring Down the Little Birds (University of Arizona Press, 2012), which was awarded an American Book Award. This lyric memoir is a meditation on motherhood and daughterhood. In 2013, Counterpath Press published an anthology of contemporary Latino poetry, fiction and nonfiction she co-edited called Angels of the Americlypse: New Latin@ Writing.

In 2014, She and her co-translator published a translation of “Song of the Old Man” by Pablo de Rokha in the anthology Pinholes in the Night: Essential Poems from Latin America, edited by Raul Zurita and Forrest Gander and published by Copper Canyon Press. She is currently co-editing and translating an anthology on the Peruvian countercultural group, the Kloaka Movement and Mariela Dreyfus’s first collection of poetry with the poet Zachary Payne.

Her most recent collections of poetry, Cruel Futures (City Lights, 2018) considers the effects of middle age and late-stage capitalism dovetailing in a new century. In the Boston Review,

Cruel Futures, Carmen Giménez Smith’s fifth collection of poetry, presents a nimble mind navigating a ruptured world where “Workplace shows tout hypercompetence and workaholism!” and the “strategy is grabbing pussies.” With humor and outrage, Giménez Smith reflects upon capitalist, misogynist, media-obsessed cultural conditions and how this environment molded the “I” in this collection.

Her forthcoming collection, Be Recorder will be published by Graywolf Press in 2019. Juan Felipe Herrera describes the book as “indispensable, required for the next evolution…Giménez Smith is going to take it all down.”

She is currently working on a collection of poetry called Nostalgia Has Such a Short Half-Life and a novel called Squander. Both volumes consider television and film as all-consuming folklore.

Giménez Smith is currently a Professor of English at Virginia Tech and a member of the poetry faculty of the Bennington Writing Seminars. With Steph Burt, she edits poetry for The Nation. She is a co-director for CantoMundo and the publisher of Noemi Press. Noemi has published over 40 full-length collections of poetry and fiction, which have received reviews in Boston Review, Publishers Weekly, The Rumpus, New Yorker, and Pleiades. With Francisco Aragon, she co-founded the Akrilica Series, a Noemi book series for innovative writing by Latinos. She also established Infidel Poetics, a series of short-form books of poetics on gender, radical identity, and the 21st century. She lives in Blacksburg, Virginia with her two children.

Links to Work Online:
Poetry Foundation
The Guardian
The Awl