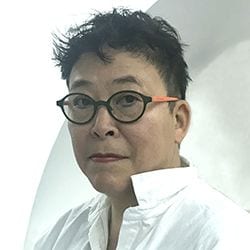 Carrie Yamaoka is a New York-based visual artist working in the expanded field of painting. Her work investigates issues of subjectivity, authorship, visibility and perception. Her working methods embrace error and defect, the slippage of material protocols, negotiations with chance and the trajectories that follow from engaging in and breaking the rules of process.

Exhibiting widely in the US and Europe since the 1980s, Yamaoka’s work has been featured in Greater New York 2015 at MoMA/PS1, and in exhibitions at the Mannheimer Kunstverein, CAN Neuchatel, MMKA, the Wexner Center, the Albright-Knox, MassMOCA and Artists Space, among other venues. She has had solo exhibitions at Debs & Co, Paul Kasmin, Lucien Terras, and Storefront Bushwick in New York.

She received a B.A. from Wesleyan University. She was a recipient of the Anonymous Was a Woman award (2017) and a grant from ArtMatters (1988). Her work has been featured and reviewed in Artforum, the New York Times, Hyperallergic, Interview and Art in America. Roberta Smith of the New York Times wrote: “her efforts intimate a rejuvenation of Minimalism, spurred by new materials, more refined techniques and fresh ideas.” Ken Johnson, also in the New York Times, called her work “ a seductive marriage of voluptuous materialism and rigorous formalism.” She is on the part-time faculty in the MFA Fine Arts programs at Parson School of Design.